This High-Tech Laser Lamp Is the ‘Headlight of the Future’

Off-road racers are using ultra-bright beams to see farther than ever. 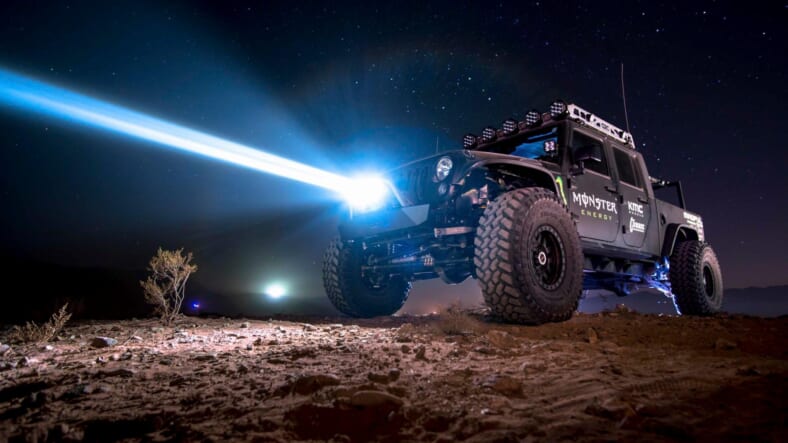 Forget LEDs: the future of ultra-bright headlights is lasers.

That’s what a new report from Bloomberg predicts, and for good reason. With the assistance of Nobel Prize-winning team member Shuji Nakamura, a Cali-based company called SLD Laser has developed an automotive lighting system that’s 10 times brighter and 100 times more illuminating than the LEDs in use today.

The problem Nakamura solved was making white light, which requires red, green and blue light to create. Red and green were not that hard but no one could really make blue light, at least not the kind required for white-light LEDs. Nakamura and two colleagues used semiconductor gallium nitride to do it. Voila, white light LEDs and Nobel Prize in Physics.

SLD Laser says that their design is capable of illuminating distances up to one kilometer (almost 2/3 of a mile) and offers “the highest luminance and intensity concentration of any white light source available.”

“Because of the point source nature of the beam, you can pinpoint the light,” Nakamura told Bloomberg. “You can even shape it dynamically on the fly, so the beam will go down, or to the right, away from the eyes of motorists.”

The technology has potential to be incorporated into increasingly prevalent driver-assistance programs, almost all of which rely at least partially on laser-based LiDar detection systems to scan the environment.

While SLD Laser’s platform could appear on certain BMW models in Europe as early as this year, it could take longer to enter the mass market in the United States. Currently, off-road drivers are using them in endurance races, notably in the Baja 1000 competition that covers the length of the Baja peninsula.

In the meantime, Nakamura also has plans to launch a toned-down U.S. version that complies with federal regulations.

“We are working instead on what we call a high-beam boost, where we add laser light to the high-beam headlights in a car,” Nakamura said. “Though we have to tone down the brightness for the American market, we are still three times brighter than LED lights.”