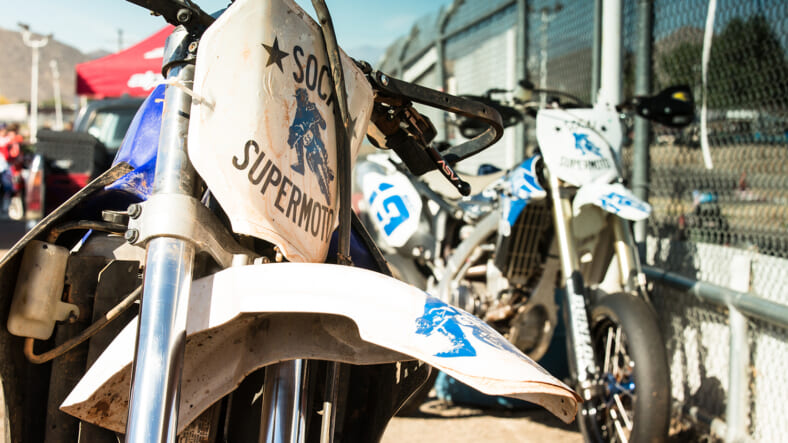 I don’t want to hit actor David Alan Grier, seeing how he’s living the high life after performing as the Cowardly Lion in NBC’s The Wiz Live!, but he’ll ruin my line if I don’t. His Suzuki DRZ400 supermoto bike stalled at the top of a big, red clay berm, which is exactly where I need to kick out the back end of my supermoto bike to set up for a tabletop jump. For a second, I consider slamming into the movie star, but instead I lock up the front brakes and fly face first into the dirt. I brush off my Alpinestars leathers, look at Grier, and see the top of a big, boyish grin peeking through his helmet.

You can’t take riding modified dirt bikes around a go-kart track in the middle of nowhere (Riverside, California) too seriously, and the laid back atmosphere here is no doubt what attracted some of the film industry’s biggest motorcycle nuts, including actors Orlando Bloom and Keanu Reeves, to this school. Wandering around the pits today is musician-turned-actor Ed Quinn from the TV series Revenge, and Teen Wolf Tyler Posey will be dropping by in a couple weeks. Don’t think, though, that this is some blithe Hollywood haven for well-heeled pretty boys to tool around on motorcycles without ruining their manicured hands. Big-wave surfer Laird Hamilton has done the school before, and Chaz Davies, the Welsh motorcycle racer who rides for Ducati in the World Superbike series, is here today, too.

So just what is this place, and more importantly, what the hell is a supermoto? “A supermoto is a motorcycle designed to ride on both asphalt and dirt at the same time,” says SoCal Supermoto owner Brian Murray. “Any dirt bike with street-orientated tires that you’re running back and forth between dirt and asphalt, that’s a supermoto.” In 2010, Murray showed up at shoddy Adams Motorsports Park on a couple of dirt bikes fitted with big brakes and sticky Dunlop tires, said he wanted to start a riding school, and SoCal Supermoto came to life. “When we started off, we would do two schools a month with five or six riders, and now we’re up to up seven or eight days a month with anywhere from ten to fifteen riders,” says Murray. “It’s been a huge growth, it’s been really steady, and we’re busier than we’ve ever been.”

Motorcyclists from all over California, faraway pockets of America, and even other countries come to SoCal Supermoto to learn the unique set of riding techniques required for this sport. “On one side of the track, you can drag your peg or drag your knee with incredible lean angle and then go to the other side of the track and slide the bike’s rear end in the dirt and then jump,” says Murray. “You don’t get that with any other form of motorcycles.”

Supermoto takes bits from just about every kind of motorcycle racing—road racing, motocross, flat track, and the like—and pieces them together to create a wholly individual riding style that takes a lot of getting used to. On the pavement, these simple, gritty machines with skinny tires are always shimmying around, and their tinny, four-stroke engines have a lot of torque but little top-end power and need constant short shifting. Pull the lever for the pitbull-bite front brakes, and the wide handlebars give you something to push against as you slide up the bike’s vinyl banana seat. Stay hugged up against the handlebars as you toss into a corner or turn, tipping the bike over, puffing out your chest, and extending your inside arm and leg out straight as if you were on riding around a flat-track circuit or on dirt trails.

Transitioning to the track’s dirt section should be a cinch then, no? Nope. It’s a mindfuck; in-turn body position stays the same but basically everything else changes in an instant. The front brakes, which you’ve been grabbing regularly, are now off limits, and you use rear brakes only. You need to slow down—a lot—seeing how the bikes are on street tires, not off-road tires, and you need to stand up on the bike as you work your way through the dirt section’s varied terrain, which ranges from giant ruts to double jumps. You swap between pavement and dirt, again and again, lap after lap, flipping your riding style every thirty odd seconds.

You bet your soon-to-be-sore ass you’re going down at least once, probably more. And when you do, don’t bitch; just laugh, pick up your bike, and keep riding.

“There are no egos out here,” says Murray. “My focus is that everyone has an awesome time while they’re here. If there’s a common theme between all of the students—the celebrities, the dirt riders, the sport riders, the street riders—is that they all tend to be a little bit more on the fun, nutty enthusiast side. They’re the type of people that don’t pigeonhole themselves into a category of motorcycles and who are really excited about all motorcycles, period.”

Which explains why by the end of the day, I’m seeing people fuse what they’ve learned here at SoCal Supermoto with riding styles they know and are comfortable with. I’m riding old-school, straight-legged supermoto style everywhere on the course until I come to one sharp, tight left turn on the pavement section. Here, I ride like I’m on a sport bike, shift my body toward the inside of the turn, and hang off the side of the Suzuki as my leathers skim the ground and the rear tire slides out. I pull into the pits, expecting a whack on the wrist for deviating far from the norm, but Murray simply slaps me on the back and smiles.

I take off my helmet and plop down between Grier and Davies. We chat with a Canadian couple, out here for a few days to get away from winter, before Quinn joins in and the conversation somehow transitions to snowboarding. Before I know it, we’re gathering up our gear and the Canucks, the Hollywood stars, the motorcycle racer, and I are getting back on our modified dirt bikes to ride around a go-kart track in the middle of nowhere.

What a strange and wonderful place.