We head into the boondocks with Tesla’s hotly-anticipated electric SUV. 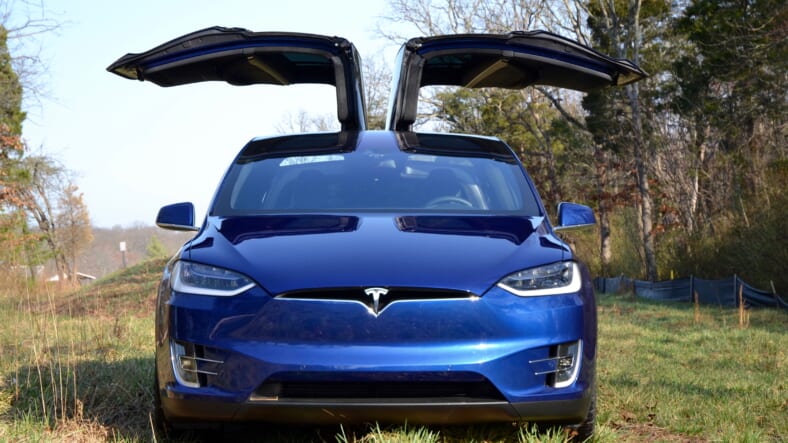 The Model X tops out at an impressive 155 mph, though testing that speed will make it difficult to achieve the car’s EPA-estimated 250-mile driving range.

Unsurprisingly, the Model X feels very much like the Model S. The SUV is built on the same chassis as the car, uses the same drivetrain and has the same cockpit displays and controls. The difference is in the rear, where there are two more rows of seating. The Model X’s seats have the contoured appearance of seats on an amusement park ride, but there was no evidence of a pull-down yoke to keep passengers in place, despite the incredible acceleration on tap in Ludicrous mode.

The third-row seats are evidently not intended as real, full-time seats in the manner of those in the back of a van or mid-size SUV. Rather, they are the digital counterparts to the analog jump seats in the “way back” section of ’70s station wagons.

There is really only space for the youngest passengers back there, so you better hope their resistance to motion sickness has developed. Hemmed in by the middle-row seat backs and the roof pillars, the non-existent view from the third-row seems destined to provoke motion sickness.

Click the shifter into Drive and the Model X whooshes away without so much as an electrical hum to suggest it is working. On the road, I let the Autopilot go to work. Unless some other, less self-sufficient driver-assistance systems, Tesla’s Autopilot does not require the driver to keep a hand on the steering wheel. A display on the dashboard replicates the car’s view of surrounding traffic, giving the driver an idea of what the car does and does not see.

While it still cannot distinguish information such as the state of traffic lights, brake lights on cars ahead or other vehicles’ turn signals that indicate their intent, it does respond more quickly and smoothly to what it can see, which is the actual position and movement of nearby vehicles.

So it is still disconcerting to rush toward a traffic light you can plainly see is red, trusting the Model X’s Autopilot sees the slowing traffic ahead and will stop. Important note: if there is not traffic stopped at the light, the Tesla’s Autopilot will not stop the Model X. You will careen straight through the red light, because Autopilot only sees objects, not lights.

A neat trick Autopilot can do is making automatic lane changes. If you notice slower traffic ahead in your lane, applying the turn signal cues the Autopilot to steer the Model X into the next lane over. Be careful to hold the turn signal stalk until the lane change is complete, or the computer will conclude you’ve changed your mind and will return the vehicle to its original lane.

The Model X is an SUV, so I was obligated to take it off-road. Suburban carpool shuttles like the Model X aren’t meant for bashing dunes in Baja or rock crawling at Moab, but customers do want to know they can reach their cabin in the summer.

For this kind of “soft-roading,“ the Model X proved competent and even confidence-inspiring rolling along a seldom-used grassy two-track trail and even maneuvering through taller wet grass an boggy soil, even with its low-profile, street-oriented Goodyears.

An adjustable suspension system lets the driver command more ground clearance in such situations, but unlike tall, bouncy regular SUVs, they can also lower it for road driving to retain the feel of driving the Model S sedan.

You can order Tesla’s new SUV by placing a $5,000 deposit through the company’s web site. They dutifully accept PayPal, which Tesla founder Elon Musk made a fortune on before he got into the electric car biz.  Just one of many reasons why the swashbuckling tech titan is known as “the real-life Tony Stark.”