Why The 1,500-HP Koenigsegg Regera Is The World’s Scariest Supercar

This insanely powerful Swedish speed demon has other elite automakers playing catch up. 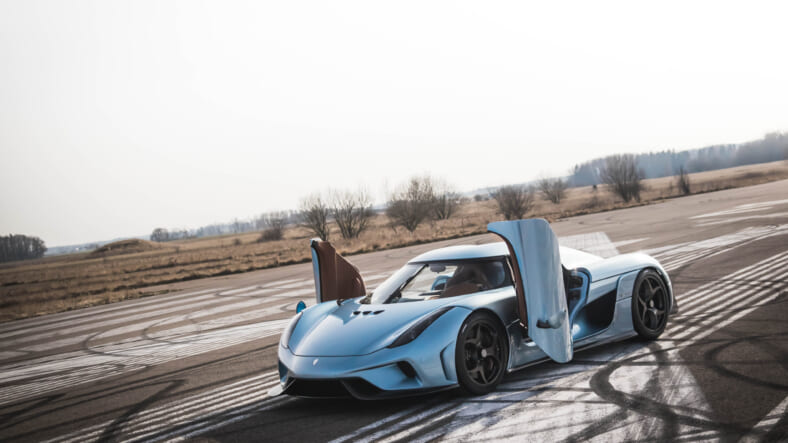 When Christian von Koenigsegg founded his eponymous Swedish supercar company in 1994 at the age of 22, he fully expected to fail. But the upstart from Stockholm decided to chase his dream anyway. “If I don’t do it now, I will probably never do it,” he thought at the time.

Car nuts may argue the relative merits of manual transmissions and paddle-shifted automatics, but the Regera blows up that debate by eliminating the gearbox entirely. The $2 million rolling sculpture routes 1,100 horsepower from its twin-turbocharged 5.0-liter V8 combustion engine directly to the rear wheels, supplementing its power with three electric motors rather than using the leverage of traditional gear ratios.

Two-hundred fifteen electric horses go directly to the V8, with each rear wheel getting its own 241-horsepower electric motor, meaning the whole system tops out at a sternum-crushing 1,500 horsepower.

The combination provides for the most powerful electric drive system in production car history, rendering benchmarks like zero to 60 almost quaint: The Regera can do 93 mph to 155 mph in 3.2 seconds, with power to spare. And she’ll take you from a standstill to 249 mph in less than 20 seconds.

Equally dramatic are the remote-controlled, hydraulically actuated hoods, wings and doors, which pop out and flip forward in a mesmerizing dance. But then, nothing about the Regera, which means “to reign” in Swedish, is average.

The company plans to build just 80 of the groundbreaking machines, which is probably a good thing for any heritage manufacturers out there that have more in the way of name recognition than fresh ideas.

“No one else can do what we are doing,” says Koenigsegg. “If you want that innovative technology, you can’t get it anywhere else.”