Behind the Wheel of the Tesla Model 3, the World’s Most Controversial Car

Does Elon Musk’s baby live up to the hype? 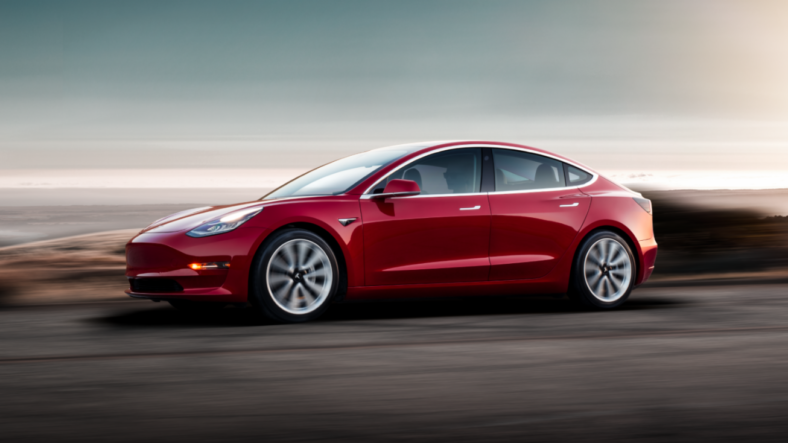 It’s been a helluva couple weeks for Tesla Inc. and its lightning rod CEO Elon Musk — and especially for his nascent “everyman” Model 3 electric wonder. When the highly regarded Consumer Reports released its initial review of the new midsize EV in late May, the sedan rated highly in many categories — but the magazine had to deliver a “not recommended” rating due to inconsistent brakes. Notably they tested the Model 3 as requiring an average of 152 feet to stop from 60-mph, which is seven more feet than a Ford F-150 pickup takes. Yikes.

This is the Tesla way, for better or worse. In its rush to meet overly optimistic Musk-set deadlines, Tesla has skipped traditional industry production benchmarks in lieu of beta testing its vehicles in the wild. Just as tech companies do, release your product unfinished and let consumers (or in this case, Consumer Reports) figure out the bugs.

Except we’re talking about an automobile with dubious brakes unready for real-world usage, not a Snapchat filter. Well, Musk blew a fuse at the collective coverage and told everyone to chillax, claiming Tesla would improve the antilock braking system via OTA (over-the-air) updates. Many in the Twittersphere scoffed, saying it was a hardware, not a software, issue. Musk fried another fuse, casting aspersions on the media as clickbait-chasing hypocrites and sounding more like a politician than the CEO of the most valuable automotive company in the world. [Side note: anyone who says to analysts that he doesn’t have to answer their “boring, bonehead questions” because they’re “not cool” as Musk did last month is so cynically glib it’s laughable. This isn’t “Jazz Hour With Uncle Elon”, it’s an earnings call.]

As promised, last week Tesla made the OTA updates without buyers having to bring their cars anywhere close to a garage or dealership, and Consumer Reports retested the Model 3 and released its revised review. Turns out in the case of the OTA updates Musk was right, and they changed their rating to “recommended”.

“To see something updated that quickly is quite remarkable,” said Jake Fisher, the magazine’s Director of Auto Testing, noting the car’s braking distance improved by nearly 20 feet. “I’ve been at CR for 19 years and tested more than 1,000 cars and I’ve never seen a car that could improve its track performance with an over-the-air update.”

Which makes our recent weekend spent with the Model 3 — especially in the middle of all this artillery launching — remarkable.

Despite Musk’s at-times nauseating bluster, he and Tesla have built quite a remarkable piece of technology. The EV is such a joy to drive, and so simple to own and operate, that if giving up our beloved internal combustion engines is the price to pay for the future we may all hang up the petrol nozzle soon.

The breezy usability starts before you even enter the car. You don’t need to hold out a keyfob or anything — just approach the Model 3 and it senses the phone in your pocket and unlocks the door before you get there (you need to download and register an app at purchase, then you’re set; the app doesn’t even need to be manually activated when you approach). The door handles don’t pop out like they do in, say, a Jaguar, but you just push in on them and the car opens up.

The liberation continues in the human/car interaction: no matter how long you look, you will not find an ignition slot or Start button. Again the car senses your phone and starts up silently — the gigantic center screen lights to life, and that is the only way you know the car is engaged. There’s no pressing of buttons, no turning of key, and, most importantly, no firing of cylinders. Everything is as quiet as when you first clicked the door closed.

Take a moment to appreciate the cabin layout. Minimalism is an understatement. The Model 3 is startling in its Spartan approach to cabin design, so clean and uncluttered as to be shocking to the eyeballs. There is a board of open pore wood that runs along the width of the dashboard, a small metal bar panel underneath it, and a massive 15-inch iPad-like touchscreen display. That’s the entire makeup of the dash. There’s a Tesla-badged steering wheel with two thumb-wheels, a clean sweep of piano lacquer running up the central tunnel… and that’s it.

If something can be alarming in absence, then the Model 3’s lack of knobs, dials and buttons surely is. Everything from navigation to phone and entertainment to even adjusting mirrors and airflow is handled via the display. The idea being that, like its brakes, OTA updates will allow Tesla designers to change whole cloth how one interacts with the Model 3 via its central display and dual thumbwheels, allowing for total re-skins of the UX. The less hardware to mess things up, the better.

Quality of materials does not match the German top dogs, but for the price point it’s fair. If you look, you can find imperfections in the stitching and other flaws that you won’t find in more experienced automakers, but nothing that affected our time behind the wheel.

Pull the single stalk sprouting from the steering column down once and you’re in Drive. Again, no engine kicking to life or any other notice that you’re ready to go (for owners of EVs, Priuses and other advanced hybrids, this will not be noteworthy — for others first driving an EV, it will be discombobulating).

Once you actually start driving, the first thing that strikes you is the airiness of the cabin, the overall aquarium-like feel of the greenhouse. If minimalism is the most salient quality of the interior, then glass is the second. The wide raked windshield combines with the long door windows, capped by a glass roof. Everywhere you look, you see the outside world around you. It is quite emancipating, in the sense that you breathe easier in an amphitheater than in a cubicle.

Then you press the throttle, and everything changes. You don’t give a damn about the birds chirping in the trees nearby, or the cloudless sky overhead, or anything for that matter — all you care about is the abundance of torque available at the whim of your big toe. There is no Ludicrous mode in the Model 3, but you don’t need it. Depress the throttle just 10%, and the EV takes off with the smooth, even thrust of a six-figure sports car. There are no gears, so the acceleration just keeps going and going and going. Perhaps it’s not as powerful as a high-octane track star, but you’ll smash through speed limits before you sniff battery limits. Commuter cars like these are usually to driving enjoyment what rice cakes are to culinary thrills. But that is not the case in a Model 3; the acceleration is bonkers.

Statistically its 0-60 mph click is listed at a respectable 5.1 seconds (private tests have clocked it around 4.6), but that doesn’t tell the whole tale. What makes the Model 3 so “squirty” is the pedal’s first inch of movement: press it even slightly and the car instantly zips forward. Want to squeeze in between two languishing Sunday drivers blocking two lanes? Press it and squirt through the hole. Wanna zoom away from the starting line at a stop sign or light? Slam it and you’ll leave everyone short of a 911 or AMG in your rearview, your skull pinned against the headrest.

But don’t believe all the hype — especially Musk’s. Despite what he recently tweeted, the Model 3 is fast, but it cannot compare it to a BMW M3.

Cost of all options, wheels, paint, etc is included (apart from Autopilot). Cost is $78k. About same as BMW M3, but 15% quicker & with better handling. Will beat anything in its class on the track.

Of course Musk was discussing a soon-to-be-released Dual Motor AWD “Performance” model, but the idea of this chassis and suspension taking on a BMW on a racetrack seems… well, dubious. (Even with a blazing 0-60 mph click of 3.5 seconds and 155 mph terminal velocity.) There’s more to performance than straight-line runs, and although the suspension is sophisticated (double wishbone up front and rear multi-link), it’s not good enough to take on a M3.

Oh, by the way, when you’re done driving? Nothing to turn off either — just slip the stalk into Park and exit the car, and the Model 3 will shut off and lock behind you.

We had the Model 3 before the OTA braking updates, but regardless we did not really test the limits of the brakes in any performance capacity. In daily driving we had no complaints, other than maybe being a bit soft for a car of this weight (about 3,800 lbs. — batteries are heavy). Now that they’ve been improved, we’ll pass judgment to Consumer Reports on this one.

We played around with its Autopilot feature a couple times, but there’s too much to unpack for a quick review. Suffice it to say that when initiated on highways, it displayed an uncanny ability to remain calmly and securely centered in lanes — something systems we’ve tested from Audi, Volvo and Mercedes failed to do. All three systems have a tendency to drift from one side line to the other, bouncing back and forth as the road monitoring systems find their edges. Not the Model 3. Engage and it finds the dead center of the lane and stays locked there. It just feels more cemented. You of course have to keep your hands on the wheel, which is something you do not have to do in Cadillac’s excellent Super Cruise driving aids.

Yes, there have been several recent crashes and even a fatality, but the point of these systems as of now is to improve safety — not remove any chance of collision. No one is promising that. And on this note I do think Musk makes a cogent point when arguing that of the 40,000+ fatalities per year, the ones in Teslas receive an inordinate and imbalanced amount of publicity and handwringing. And they do save lives, both common and those of superstar German DJs…

There’s lots of “bad” news about Teslas w/ autopilot crashing.
Just to show the other side too:
I once fell asleep driving home late at night on the highway (w/ autopilot on) and got woken up by it beeping + turning off music to wake me up. Would have prob been dead without it.

Of course, the counterargument that Tesla Inc. continues to use real world driving to beta-test its Autopilot system should be held under a microscope, as should those of every automaker who is live-testing its safety systems.

In tech lingo they have the concept of “removing friction”, as in eliminating points that resist ease of use. The Model 3 accomplishes this goal in ways no other automobile I have ever driven does: unlocking, starting, driving, exiting and locking, Autopilot, etc. In almost every way imaginable, the vehicle opens itself up for you and is ready for use. It is relaxing in a way that is impossible to understand until you enjoy it for yourself. Which by no means suggests the Model 3 is the most luxurious or even comfortable vehicle out there; it is just the most frictionless. And that easy experience — more than its long luxurious torque wave and airy greenhouse — make it superlative. Add 310 miles of zero-emission driving and we are just beginning to glimpse the #future.