It roars out of Vegas at the end of October. 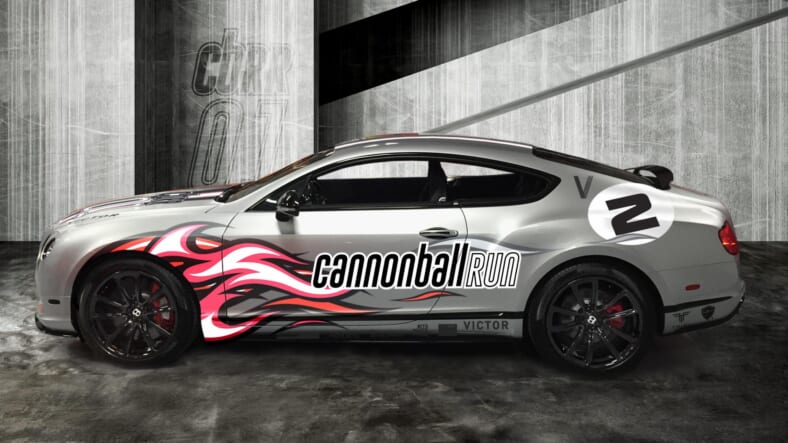 The Cannonball Run is real, and yes, it was inspired by the Burt Reynolds movie. Like its movie namesake, the Cannonball Run Rally is a few dozen killer cars—from exotics to classics to supercars—speeding along a predetermined route across hundreds of miles of backroads with huge parties along the way.

Since it’s just a few weeks from now, the hype machine behind the 2018 Cannonball Rally is shifting into high gear.

Starting October 26th in Vegas and ending on November 2nd in Seattle, the 2018 Cannonball brings together a tight-knit group of route planners, scouts and, of course, drivers.

They will spend a week speeding across some of the most interesting, challenging and straight-up fun roads the west coast has to offer.

From the desert highways of Nevada to the palm tree-lined roads of Southern California to the scenic oceanside routes of the Pacific Northwest, Cannonball 2018 will draw crowds ready to eyeball tons of four-wheeled eye candy.

If past years are any indication, the participating cars will have impeccable pedigrees. Ferraris, Lamborghinis, Paganis and McLarens are regular staples of the run, all with plenty of unique tuning and custom paint to make them stand out from the competition.

The organization behind the Cannonball insists it is a group drive and not a race, but every car is packing so much horsepower and race-inspired engineering it’d be naive to think speed limits matter to this crew. That said, it’d be harder to find a group of people with more appreciation for the straightaways and twisty curves of American roads than the folks who plan and participate in the Rally.

The Cannonballers are said to be a very welcoming group, with many ralliers returning each year and open registration for anyone who wants to join. Unfortunately for most eager drivers, that registration comes with a hefty $25k fee, so while newcomers are greeted with open arms, the group is ultimately pretty exclusive.

For their $25k a cannonballer gets luxury hotel stays throughout the week, track time, concierge, car detailing, gourmet meals, police escorts and—at least in prior years—private concerts. All that is in addition to a thoughtful, well-planned, exhilarating and memorable drive across some of the most beautiful parts of the country.

Participating in the Cannonball Run may forever remain a dream for many. But joining drivers for one of the several pitstop parties along the way, including a secretive Halloween party during this year’s run, is well within reach.

Just hang out on the PCH and wait until a half-mile long blur of supercars passes by, then try to follow them to their next rager. It should be easy, provided your car can do 200+ mph.