Maxim goes behind the scenes at the vaunted British carmaker’s space-age manufacturing complex. 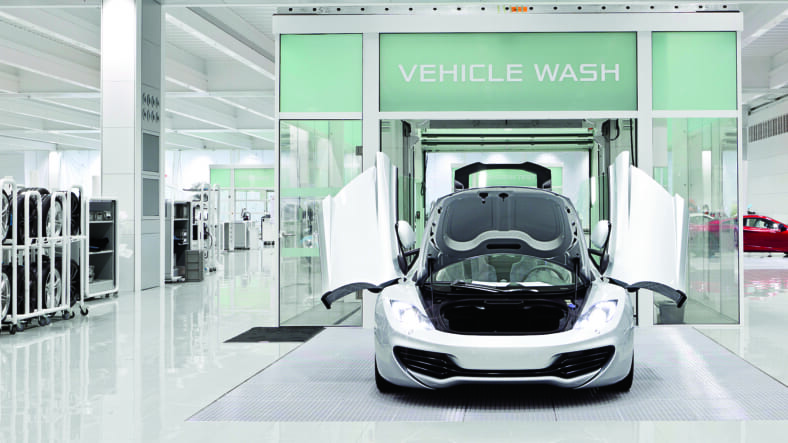 They might as well manufacture cloaking devices here, for all you can see of the place from outside the property. Local codes prohibit construction high enough to be viewed from a distance, so much of the glassed-in, yin-yang-shaped offices and the more conventionally rectangular factory are partially underground.

That’s the same company that conceived Apple’s similarly circle-themed Campus 2 in Cupertino, California. And the fact that McLaren also happens to be headed by a compulsively detail-oriented perfectionist who values the austere sterility of white over all other colors probably isn’t a coincidence. The floor of the company’s factory is covered in pristine blank tiles. Most hospital surgical suites don’t look as clean as McLaren’s production center.

Walking the factory floor, there’s no clanking conveyor line or scream of pneumatic tools; just a quiet hum and the occasional distant hammering of a part being seated precisely into place. Workers, mostly men, wear tidy black uniforms that strike a contrast with their arctic workspace. There are none of the grubby printed T-shirts and ripped jeans you typically find in U.S. assembly plants. In fact, the only colors you’ll see are applied to the cars themselves.

“Our objective has been to create an outstanding industrial building,” says Dennis, who cuts a fit physical figure that suggests he could be younger than his 68 years, with a meticulous personal appearance that mirrors his factory. “But it doesn’t matter how wonderful the box is if it is not also functional, inspirational and motivational.”

Such is the power of McLaren’s temple to design that the center itself helps the company lure talent, even the likes of Formula One world driving champions, including current team driver Jenson Button.

“The first time I visited McLaren, which was at the end of 2009, just after I’d won the world championship, I warned myself not to be overly impressed by the building—I didn’t want it to sway my decision about joining the team,” he said. “But how can you fail to be impressed? It’s an incredible facility, one that really encourages creative thinking and engineering. It’s a testament to Ron’s vision.”

The swirling McLaren Technology Centre fills about two-thirds of a circle, with the other third represented by a pond that holds runoff water from the roof, which doubles as a coolant for the climate control system. The water feature works well as scenery, too, as it borders the cafeteria and the MTC’s main hallway, called the Boulevard. Visitors passing through the Boulevard encounter an incredible arrangement of some of the company’s victorious racecars from the past.

Glass windows from this passage look in at the shops where the team’s newest racecars are built and maintained. McLaren’s trophy cabinet, nearly a hundred yards long, flanks both sides of the hallway, displaying 647 trophies for the team’s successes over the years. The company says it is the world’s largest collection of sports trophies of any kind, and it’s hard to imagine they could be wrong.

Founded in 1963 by New Zealander Bruce McLaren, the company is one of the most dominant forces in Formula One history, with 182 grand prix victories, second only to Ferrari’s total; 12 world driving championships (for the individual driver scoring the most points from race finishes); and eight top constructor titles (for the team whose two cars, in aggregate, score the most points).

Driver’s championships are all fans care about, but teams value the constructor’s championship, because it shows which team studied the rules and devised the most devilishly clever cars each season.

After McLaren died in a crash testing a new racecar in 1970, the team eventually overcame his loss, enjoying success through the 1970s with drivers Emerson Fittipaldi and James Hunt (depicted in the 2013 Ron Howard film Rush). But by the early ’80s, McLaren’s momentum had flagged.

Ron Dennis was a Formula One mechanic when he launched his own Formula 2 racing team, called Project 4, here in his hometown in 1971. Sponsor Marlboro arranged a marriage between Dennis’ team and the fading McLaren outfit in 1980, which is why, ever since, McLaren racecars bear the prefix “MP4,” followed by a sequential number. It stands for “McLaren Project 4.”

In 1992, McLaren followed Ferrari’s blueprint of leveraging its race-forged image to sell high-performance street cars to generate revenue for the racing program, and introduced the unorthodox three-seat McLaren F1, a legendary V12-powered carbon fiber rocket that placed the driver in the center of the car, just like the team’s racecars.

But McLaren Automotive only got rolling in earnest in 2011 with the launch of the MP4-12C, a name only a diehard gearhead like Ron Dennis could love. Now the cars’ alphanumerics reflect their metric horsepower ratings.

With Dennis’ characteristic precision, McLaren has recently organized its product line into three distinct families: the Ultimate, the Super and the Sport series. The Ultimate series is for cars like the F1 and, more recently, the P1, a limited-production, 217-mph, flame-spitting hybrid-electric hypercar that the company terms the “spiritual successor” to the F1.

The Super series consists of fast, exotic cars whose production isn’t capped at a very small number (McLaren built only 106 of the Ultimate F1s and 375 P1s), so anyone with enough money can actually buy one. A $349,500 check will put you in a 666-horsepower, 203-mph 675LT Spider that’s equally skilled at slashing lap times and trolling Ocean Drive in South Beach.

Or you can cross the featureless desert between Los Angeles and Las Vegas in the high-speed comfort of the 570GT from the Sport series. The GT is a luxury-trimmed two-seater with a side-hinged rear hatch that provides space for a weekend getaway for two (using the bespoke luggage created expressly to fit the car’s cargo area, natch).

All of the models from all of the series are built on a carbon fiber chassis, just as every McLaren ever built has been since Dennis arrived in 1980. Using carbon fiber as its signature, McLaren is able to forge a credible link between the team that created the world’s first all-carbon-fiber Formula One racecar to a manufacturing arm that exclusively uses the material as the foundation for its road cars.

This makes McLaren’s cars lighter than those of its famous Italian rivals, and McLaren’s recent arrival in the street car market boosts the exclusivity and mystique of its products. And the cars deliver on this promise. We called the 675LT “a 666-horsepower, twin-turbo V8 intercontinental ballistic missile” in our review last year.

All of McLaren’s cars use dihedral doors that flip upward and forward in one sweep, while other supercar makers reserve their unorthodox door hinges for only their priciest models. So every McLaren driver, even the buyer of the most reasonably priced, $184,900 570S, can have the experience of flipping the driver’s door open to stun gawking onlookers, just like Marty McFly.

The Sport series is meant to boost revenue for McLaren Automotive as a “higher-volume” model, which McLaren hopes to grow to approximately 2,000 cars per year. The company sold just 1,648 cars in total last year. Makers of such super sports cars are grappling with government fuel-economy requirements in markets around the world, and McLaren has announced that half its production cars will be hybrid-electric by 2022. By that time, the company expects to be building 4,500 cars per year at its low-impact headquarters site.

The hybrid drivetrain plan aligns with Formula One’s current specifications, which mandate that racecars employ an electric system to recover energy while braking and use it to provide a boost when accelerating. It’s the same technology that has upended McLaren’s traditional on-track success, as a switch to a new Honda hybrid-electric “power unit” (as it is unromantically termed) in 2015 left the McLaren-Honda team foundering at the back of the field. But this year, the team promises solid respectability. “At some point during the season, we will begin to spring a few surprises,” pledges Dennis.

Meanwhile, back at the McLaren Technology Centre, engineers will be busily conceiving even more-advanced future production models for each of the company’s three lines. Of those, the Ultimate series is due for a new iteration. When it arrives, buyers will jet in for pickup, touring the incredible MTC and lunching in the executive dining room (which overlooks the scenic pond) before attending the grand unveiling of their own custom-specified, limited-production supercar.

They can be sure of two things: It will be carbon fiber; and it will be the ultimate expression of technology, speed and design.