The 20 Sickest Wheels of All Time, And the Cars That Rocked Them

Take these for a spin. 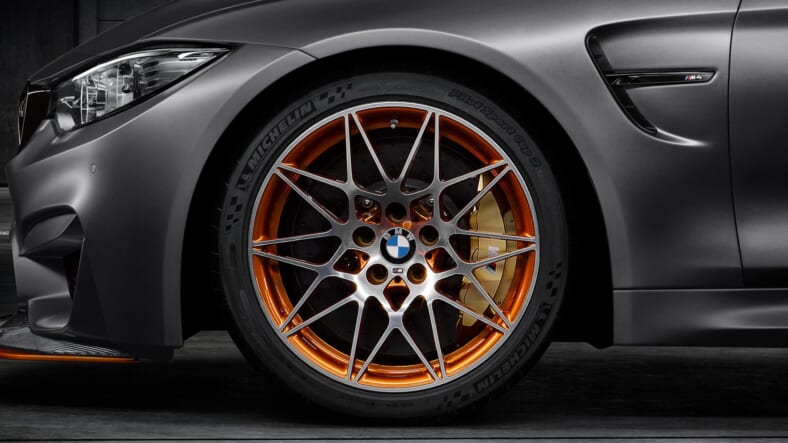 A world of avid sneaker collectors can easily understand the notion that kicks make the style, so we’re taking a look at the best-looking wheels on cars, courtesy of Gear Patrol‘s top-20 list of favs.

2016 BMW M4 GTS (above): The orange-accented wheels of the 2016 BMW M4 GTS are an absolute high-water mark, and they grace a car that doesn’t cost as much as your house and that doesn’t reside as a permanent exhibit in the Museum of Modern Art, so you can realistically drive these wheels if you want.

2017 Lamborghini Aventador S Roadster: Lamborghini is know for being extreme, and the amazing wheels on the company’s flagship roadster show why.

2007 Subaru STI: Owners had to add the “555” cigarette livery themselves if they wanted to complete the rally replica appearance of the STI, but it came with the all-important gold wheels to match the race car’s electric blue paint.

Same for the Lancia Delta, which was a pure rally replica from the early ’90s, complete with its signature race-ready aluminum wheels.

2005 BMW Alpina B7: How many spokes can a wheel have before it is a classic wire spoke wheel?

1968 ‘Bullitt’ Ford Mustang 390 GT: Classic ’60s-style five-spoke mags were Steve McQueen’s choice for his Mustang, so who are we to second-guess him?

1967 Ferrari 330 P4: Yeah, smudge the window with your nose looking at this Ferrari on display, because that’s as close as you’ll get. But you can appreciate its classic gold-anodized centerlocks.

1971 Lamborghini Miura SV: More cast magnesium wheels. With centerlocks. As it should be.

1985 BMW M3: The flared-fender, big-wing first-generation M3, known by the code name E30, rolled on basket-weave aluminum wheels that were as much a design theme of the ’80s as pastel colors and big hair.

2009 Mercedes-Benz SLR McLaren: This unorthodox collaboration between Mercedes and McLaren used these turbine-spoke wheels to flow cooling air to its brakes.

1980 Saab 900 Turbo: Have you ever seen anything remotely like these Saab wheels? And could they be any more perfect for Saab’s bizarre hunchbacked turbo?

1978 Pontiac Firebird Trans-Am: Here’s where we diverge from Gear Patrol‘s list. For their 20th entry, they copped out and went with Ford Crown Victoria cop car steel wheels. But that was only because they forgot about the Trans-Am’s signature ‘snowflake’ wheels of the ’70s. They were as crucial a part of the Trans-Am’s look as the flaming chicken graphic on the hood.