The Volkswagen Golf R is the Most Powerful Golf Ever Built

This pricey little bug is Clark Kent on the outside, and some sort of hot-hatch superhero underneath. 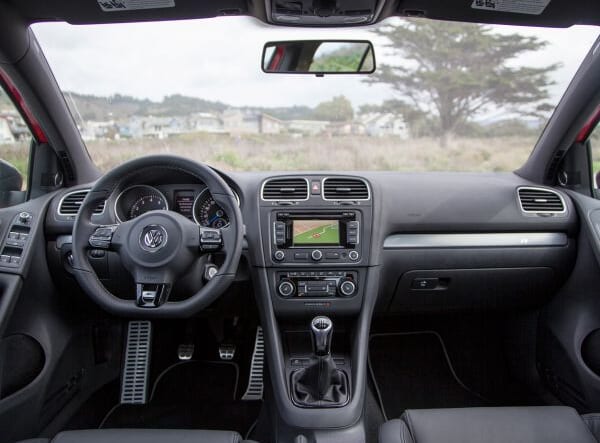 For decades, the hot hatchback has been the thinking man’s performance car: As iconoclastic as Euro art-house cinema, and the antithesis of macho American muscle.

But a hatchback fan’s nerdiest, Natalie-Portman-fueled dreams couldn’t have conjured the Volkswagen Golf R. Based on the award-hogging, seventh-generation Golf, the R version still looks like Clark Kent on the outside, and it’s equally earnest and practical. But beneath that solid-citizen exterior lies the fastest, most powerful Golf in history: A 292 horsepower, all-wheel-drive compact that sizzles to 60 mph in 4.9 seconds and peaks at 155 mph.

Those are superhero numbers for any hot hatch. They’re also a long way from 1983, when the original Rabbit GTI managed 90 horsepower and a 10.6-second squirt to 60 mph. Weighing just 1,950 pounds, that seminal hot hatch actually felt fast for its time, and a revelation in handling: I owned an ’84 GTI, and later an ’88 16-valve whose 123 horses chopped the 0-60 mph time to eight seconds flat.

Here in 2015, your mom’s Camry can go faster. Tokyo assassins like the Subaru WRX STi and Mitsubushi Evolution—and soon, the Euro-designed, 316-horse Ford Focus ST, the juiciest forbidden fruit of American hatch fans—necessitate a faster pace. The VW delivered on a winding route from San Diego to Julian, a quaint town in the Cuyamaca Mountains that sprang up during the California gold rush but is now known for its homespun apple pies. Car and motorcycle enthusiasts also know Julian and environs for some of the most rollicking public roads in these United States—including two-laners in the Cleveland National Forest that we tickled, teased and ultimately torched in the Golf R.

The Golf R does suffer one existential quandary: The  GTI on which it is based is quite possibly the best all-around performer you can buy for under $30,000. But starting at $37,415—that’s with the brilliant six-speed, DSG dual-clutch automated gearbox—the Golf R can hardly claim status of lovable underdog. The manual version, on sale in a few months, will start closer to $36,000. Adding a sensitive, driver-adjustable magnetic suspension, navigation system, Fender audio and 19-inch alloy wheels kicks that to $39,910. That’s about $8,000 more than a similarly equipped GTI with up to 220 horsepower.

Well, pry off the Volkswagen badges, and you might as well be driving a high-performance S model from Audi. That includes luxury: A hushed, high-dollar interior and dynamic refinement that make the Golf R’s Asian rivals feel as juvenile and wearying as a Fast and Furious movie marathon.

The V-Dubya shares its primo MQB chassis with Audi’s A3 and S3 sedans and upcoming TT sports car. The 2.0-liter, direct-injected turbo engine, Haldex-based AWD system and dual-clutch gearbox are also straight from the S3. The glowing Teutonic gear inside, including amazing sport seats, a flat-bottomed steering wheel and scepter-like DSG shift lever, wouldn’t look out of place in an $80,000 luxury car. And where you can’t get a manual transmission in the Audi, the Volkswagen’s optional six-speed is crisp and sensitive enough – just perfect, actually – to satisfy the most finicky Porsche fanatic.

One such fanatic joins us on our route, though he also owns and loves an 1981 GTI: Hans Stuck, the legendary retired racer who wrangled tricky Porsche 962’s to back-to-back LeMans wins during the ’80s.

Stuck, who’s unusually lanky for a race driver at six feet four, logged hundreds of laps in the Golf R at Germany’s Nürburgring track. He fussed over the steering, brakes and suspension – and tussled with VW management – to get the car just right. Stuck shakes his head when he recalls his own epic runs in Porsche Turbos of the ‘70s, nicknamed “The Widowmaker” for their perilous handling.

“You needed four hands to drive that car,” Stuck recalls. “Compared to that, it’s really hard to throw the Golf R away. Those old cars are fun, but they feel a century away from this.”
True to Stuck’s word, it would take a special kind of idiot to put the Golf R in a ditch. In this Nowheresville of California, the VW slingshots through corners as unerringly as a stone from mighty David. Even with tires howling, I become almost oblivious to the plunging ravines looming just off the shoulders.

As ever, muscle heads won’t get their heads around this VW. Yes, you can have your V8 for the price of the Golf R, in a reasonably equipped Mustang GT, Camaro SS or Challenger R/T. All are worthy.

Europhiles, in contrast, tend to roll their eyes at Detroit iron. If they squint, they might see the Golf R as the bargain of a set that includes the BMW 2-Series, Mercedes-Benz GLA and especially Audi’s own S3. The Audi starts at $41,995, and easily shoots past $48,000. A lightly-optioned, 240-hp BMW 228i coupe can be had for the VW’s price, but the Golf R will smoke its performance and is more practical. The Mercedes GLA 45 AMG crossover hatch amasses 355 horses, but it also costs 60 grand when all is said and done.

Stick with the manual shifter and skip the magnetic suspension, and the Golf R can be had for barely $36,000. Even most VW fans will still find the GTI the smarter play. But if you want to keep up with Evos, the Golf R is the new sheriff of hot hatches. Now hurry into town, Focus RS, so we can stage a proper gunfight.