We Checked Out The Inside Of The New VW Bus, And It’s Pretty Amazing

Here’s a sneak peek at the seriously cool features inside… 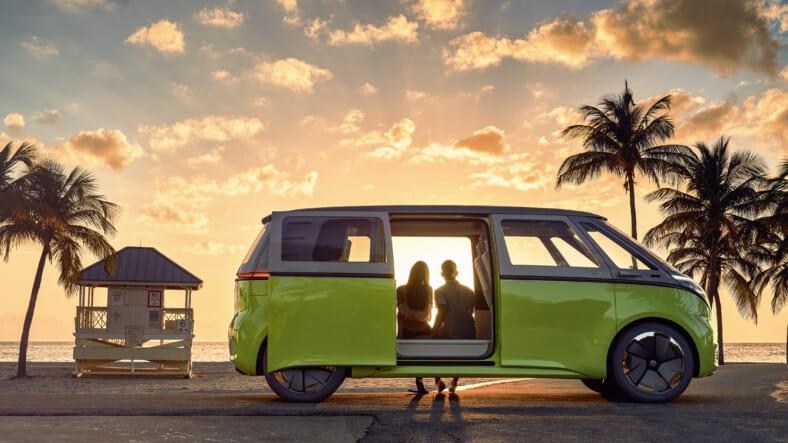 The Volkswagen I.D. Buzz concept is a hand-built project car, so we can’t exactly hit the road to follow Phish on tour to put it through its paces. But we did have a chance to crawl through its cabin at the Geneva Motor Show, and got an eyeful of the hotly-anticipated vehicle’s groundbreaking features.

The floor inside the concept is much higher than that of a regular VW bus, because it contains the battery pack and electric motors that are the basic components of this new MEB electric car platform.

The floor also boasts the mounting channels used in recent VW vans that let the seats and console slide fore and aft as needed, but in the case of the I.D Buzz, those channels extend to include the front seats.

That’s because the amazingly driver-less I.D. Buzz can have its front seats turned around to face the center of the vehicle for conversation while the computer drives.

The steering wheel stows in the dashboard when the I.D. Buzz is in autonomous mode, and it extends with a press of what would be the horn button on other cars.

Once extended, the wheel steers the front wheels through electric servo motors. In the concept there is significant lag in response, so you’d never want to drive this vehicle anywhere other than a show stage.

The dashboard carries a Buddha gnome figurine that levitates magnetically and rotates. Other figurines were also created, including a rocker with a guitar, but they were all stolen at the Detroit auto show, leaving only this tiny bearded Buddha. (Bad Karma, man.)

In the passenger cabin, the seats slide and fold depending on the users’ needs, and the console also moves forward and back, with its large display screen providing infotainment to the passengers.

In the rear seat area, VW anticipates some passengers will nap, so they’ve provided sliding headrests that extend from the rear roof pillar to provide a cushion to support their heads from flopping uncomfortably onto the side window glass.

All these fun features sound nice, but they are meaningless if VW continues to tease us with concepts, but never pulls the trigger. This time could be different, however, because the MEB electric car platform underpinning the I.D. Buzz is a potential game changer.

“The I.D. Buzz is a highly emotional product,” said CEO of Volkswagen’s North America region Hinrich Woebcken in a media roundtable with Maxim at the show.

Lighters and ashtrays have long since gone out of vogue in new cars, but all that electric power could provide for one hell of a lighter. It might even be a popular option for those seeking to channel the hippie legacy of the VW bus inside this buzzy electric reboot.