These Custom Ducatis and MV Agustas Are Silver Dream Machines

Shine on, you crazy diamond. 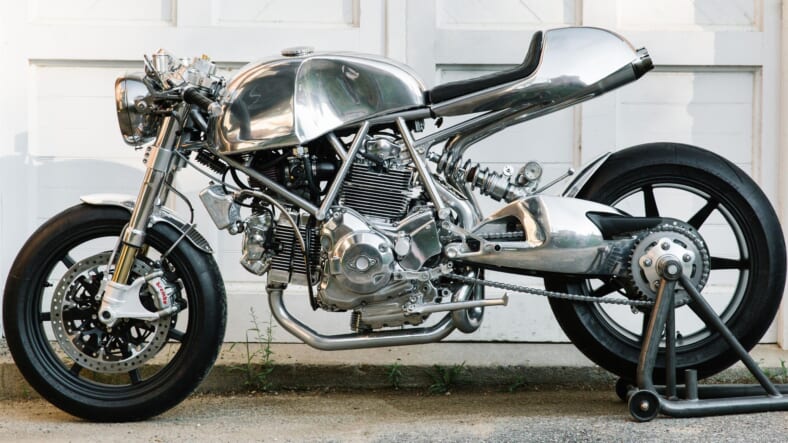 Constructed in Rimini, Italy using Japanese superbike innards cannibalized from brand new bikes, then shoehorned into superior frames with visionary aesthetics. Also responsible for designing the Ducati 916, and the MV Agusta F4, Tamburini was an icon.

In the Top Trumps game of cards the Bimota was always the most expensive piece of kit. Which made sense, given they threw away most of a brand new bike to make every one.

Today, if you are looking for an exotic and beautiful beast of a bike like a Bimota your list will be short. Right at the very top with a star will be someone who shares more than a few things in common with Tamburini.

His name is Walt Siegl. And for a cool 36 grand you can join an elite cadre of petrolheads basking in the glory of machinery so beautiful it makes grown men go weak at the knees. And your granny come over all of a quiver. Without Brad Pitt offering her a ride in her nighty on one of his.

It’s a long way from dropping out of art school in Austria to becoming one of the finest custom motorcycle builders in the USA today. But it was also a long way from pipe fitting school dropout to cofounding Bimota and later designing the Ducati 916 and MV Agusta F4 for Tamburini.

One thing he and Siegl share in common is being self taught. Both guys with no formal training who loved going fast while looking good. Becoming renowned for tuning bikes both aesthetically and mechanically. You could just as easily stick one of Walt’s creations on a pedestal in your Ferris Bueller-esque man cave as thrash it to within an inch of your and its life.

Colin Chapman, the founder of Lotus, is often quoted as saying his main objective was to “simplify, then add lightness.” Walt builds his bikes with this same ideal in mind. And with perfect geometry and balance.

My two favorites of his “production” bikes, the Leggero and Bol d’Or, are built around a Ducati heart on the one hand, and an MV Agusta on the other. Yet more parallels with Tamburini for those so inclined.

The Leggero is powered by the classic Ducati Desmo engine, and the Bol d’Or an MV three cylinder mill. Both deconstructed and heavily modified to attain the performance Walt demands. He raced competitively in his younger days in Marseille, France, so understands the addiction of speed. But also that there is more to riding pleasure than horsepower and straight line missile-like hyperspace.

His obsession with lightness and the correct delivery of power, chassis flex, suspension and rubber leads to a riding experience very different from that of today’s high-tech crotch rockets. Superlative analog in a world of digital bits.

As he says himself of the Ducati powerplant, “It’s that 90 degree, two-valve, Desmo engine that won so many hearts, including mine. There is no engine out there with the same characteristics. It’s a brilliant performer that can be hammered on the racetrack or ridden to the café.”

“No, it won’t have 200 horsepower, but that was never really what owning a Ducati was all about. People bought Ducatis because they evoked a certain feeling that other manufacturers were never able to capture. They made you fall in love.”

“No matter what engine size, be it a 650 or an 1100, you have plenty of grunt out of corners: You dip the bike in, and as soon as you clip the apex you feed the throttle in and it makes you grin stupid. It’s how these engines make power that is so much fun. And at the end of the day your jacket smells like spent fuel.”

If his breathtakingly beautiful hand built Leggero and Bol d’Or are not fantastic enough, you can work with him to spec your own. Like the silver dream machine that is the Leggero “Brave”, or the David Yurman Project.

And if Brad Pitt pokes his head around the door with your granny with smiles for miles, don’t be surprised.