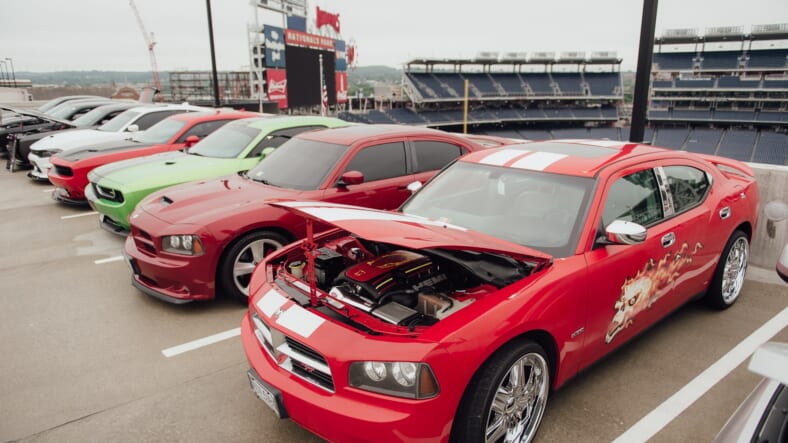 A torn ACL took Washington Nationals center fielder Adam Eaton out for the season. It definitely hasn’t kept him completely out of the action.

Eaton is a car nut whose dad was a drag racer when he was growing up. He decided to use his free time to organize the “Rev Up The Park,” car show. It was a great opportunity for players and fans to come together and exhibit their rides, with proceeds from entries going to The Dragonfly Foundation for young cancer patients.

Eaton—who joined the team this season—previously hosted a bartending event at spring training camp with his old team. This was his first foray into promoting a car show. More than 200 classic and enthusiast cars were on display, double Eaton’s modest first-time goal of hundred cars.

He has much bigger plans for the future, when he hopes to move the event out of the parking garage. “My dream is to have it on the field,” he said. So far, the team hasn’t warmed to the idea. But Nationals Park hosts concerts and other events on the field, so there is no reason it couldn’t host a car show, as far as Eaton is concerned.

Eaton says his paltry three cars don’t measure up to Kendrick’s eight or nine, but he hopes to reach that level some day. Meanwhile, he’s lobbying to get one of the rumored mid-engine Corvettes when they’re available in a year or so.

Eaton admired the variety of the cars exhibited. They ranged from classic Jaguar E-Type sports cars, to rat rods, to a 1946 Cadillac convertible and modern Dodge Hellcat muscle cars. “You get all walks of life here; you get everything,” Eaton enthused.

He gave autographed souvenir bats to his favorites. They included the a DeLorean, the ’46 Caddy, and a ’69 Camaro.