Stuffing its biggest engine into its smallest car has produced Aston’s fastest production car ever. 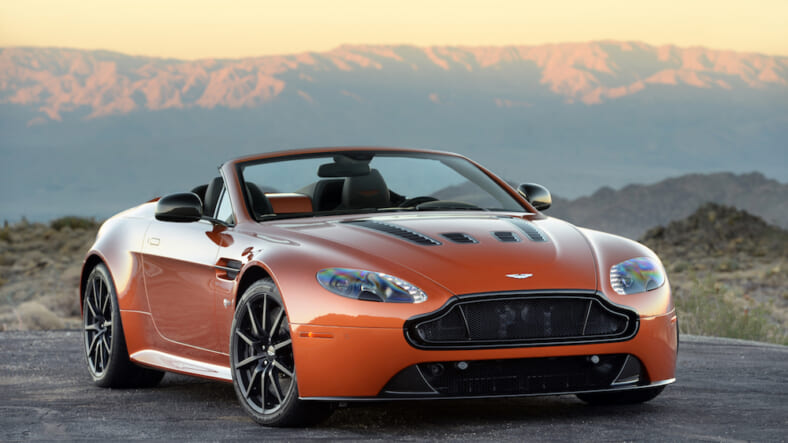 You were thinking you’d buy one of those sexy-looking Aston Martin Vantage Roadsters, if only they weren’t so damn slow. Right? I knew it!

Good news, the engineers at Aston heard your cries and got to work retuning the previously sluggish V12 powerplant for more power and snappier throttle response. Result: Now the car blasts to 60 mph in just 3.7 seconds and tops out at 205 mph (if it is a coupe, the tested convertible falls a few mph short of that). Only hand-built specials like the One-77 and Vulcan are faster. At $200,000, the V-12 Vantage S Roadster is a comparative bargain.

“It is a serious bit of kit,” promised John Caress, chief engineer for product development at Aston. Maintaining our journalistic skepticism, we deferred judgment on the matter until after a test drive through the canyons north of Los Angeles.

The monstrous 6.0-liter V12 fills the Vantage’s engine bay like basement floodwater, spilling into every possible space. The previous engine was just as big though, so how did it get faster? The new-fashioned way: with a better computer. The old engine management computer just lacked the computing power to exploit the engine’s true potential, Caress explained. “The engineers knew the car could do more,” he added. Enter new computer, whose faster brains regulate the engine’s fuel injection system to the thousandth of a milliliter to optimize its output.

You know where the engine needed no improvement? In its sound. And there’s no electronically-enhanced fake sound or other foolishness here. The Vantage’s V-12 rumble is sublime. The car’s navigation system (also all-new for this year) should provide a map of nearby tunnels to scream through.

Its styling also remains superb, providing less room for improvement than the engine had. So Aston wisely left that alone, save for offering the volcanic new Cinnebar Orange paint hue.

Each car maker has its own unique details that it hopes distinguish it from competitors. Some of these are fun, but most are just silly gimmicks. Aston has a unique glass key that you insert into a slot in the dashboard to start the car. The thing speaks of money, which is probably why it is on display in the center of the dash. That is literal: it is costly to replace, which is why Caress said since an unfortunate mishap involving his son and a glass key, he uses a plastic one for daily driving in his own car. But the glass key is stunning and unique. I vote in favor of glass.

The Vantage stays decidedly traditional in a couple areas, with mixed results. The car uses a seven-speed automated manual transmission, one of those you have to learn the rhythm of to avoid jerky gear changes. It spares the clutch-averse the need to use a clutch pedal, but probably also annoys them by not being as smooth as a true automatic transmission. I’d take the H-pattern manual if Aston could sell enough of them to bother offering it, but they can’t.

They are right. This blend of old and new is indeed a serious bit of kit.