Give it up for these trail-blazing beauties. 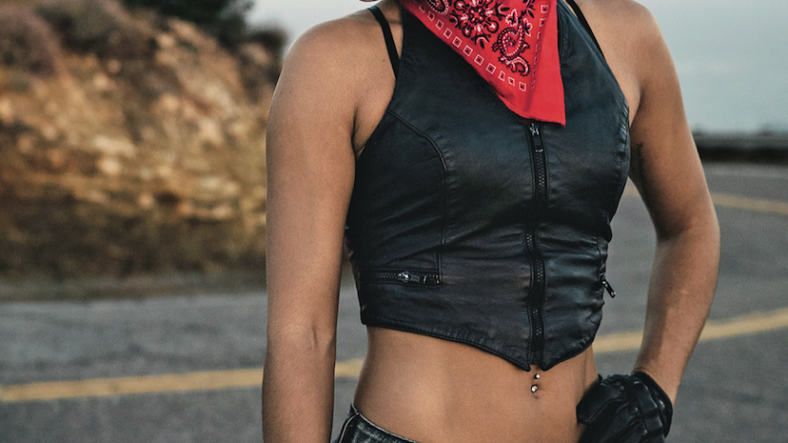 Kelly Yazdi is thinking what I’m thinking. We’ve just picked up a pair of
Indian motorcycles on the Pacific Coast Highway near Malibu. We’re
supposed to shuttle them to downtown Los Angeles for a women’s
motorcycle event there. Showing up at such mixers is certainly a part
of the 27-year-old’s job, which can be loosely defined as follows: model, biker
chick, event planner, brand ambassador.

But a quick scan of the brake lights in an
unrelenting line from Pacific Palisades to the city has inspired an audible. The words
“We don’t have to go to downtown L.A.” have barely left her lips before I’m nodding
in agreement and we’re blasting down the 1 toward Baja.

Becoming a successful model once required Amazonian height, a waifish waist
and high cheekbones, and hundreds of thousands of Instagram followers. No
longer. Yazdi, who’s wearing what she calls her “Paul Bunyan flannel” with paint
chips on it, is among a legion of pioneering women who ride motorcycles and who
are rewriting the rules, opening doors with their looks but then creating lasting
brands that transcend physical beauty in favor of something they actually like doing.
And they might just save the motorcycle industry.

As we blast down the PCH, Yazdi goofs off, dropping a foot on the asphalt,
leaning forward until she’s almost prone to punch the air ahead, tricks she picked up
working as a stuntwoman in Hollywood from 2012 to 2015. Moves like this inspire
scorn from the legion of grumpy old dudes who are not entirely pleased that the
fairer sex is elbowing its way into their hobby; just as they “mansplain” at the gym,
men like to chastise women they deem posers. Yazdi laughs it off. She grew up
riding dirt bikes in the backwoods of Minnesota with her brothers, and she’s entirely
comfortable fending off the haters.

She’s also well aware that the future of the motorcycle industry is female.
Motorcycle ownership among all adults has declined precipitously over the past decade or two, thanks largely to economic instability in Yazdi’s generation:
Millennials can’t afford to buy cars these days, much less motorcycles. The
weekend riders of yore are graying, and that’s a terrifying sociological shift
to the makers of motorcycles. Their brands rely on growth, and thankfully
they’ve recently discovered what Yazdi calls the “secret sauce”—women.

Yazdi wants to build a culture, not a following, and a brand for
herself that’s not just based on appearance. She works with Indian
Motorcycle and other bike companies not only to pose for pictures but to
put together events: Last year she was the principal creator of the women’s only
festival Wild Gypsy Tour at Sturgis Buffalo Chip, the nation’s premier
motorcycle gathering.

Women now make up one of the industry’s fastest-growing segments,
and they have for the past decade. In 1998, only 8 percent of motorcycle
registrations belonged to women, according to a recent survey conducted
by the Motorcycle Industry Council. By 2014, the number of female owners
nearly tripled. What’s interesting about that growth transcends statistics, though.

Many women are discovering motorcycles as an expression of
freedom, as a potent symbol that they’re not content riding shotgun on the
back of a man’s bike. For some, it’s even deeper than that. “There’s always
been this box for women to fit into, that [says] women can only do these
certain things,” Yazdi says. “I want to make that box bigger.”

Leah Misch, 31, is a nurse in Wisconsin. The first time she’d ever gotten
on a bike was at age 10, and she pulled the throttle
of a dirt bike so hard that it flipped back on top
of her. She rediscovered motorcycles eight years
ago after one of her friends decided she wanted to
learn how to ride one. “I was like, ‘Girls don’t ride
motorcycles. You’re going to get hurt.'”

But the
woman took a riding safety class and “came back
so excited,” Misch says. “I thought, Huh. I wonder
if I could learn to ride a motorcycle.” That year,
Misch left an abusive relationship and penned “bucket list” to inspire her. Near the top of the list:
Learn how to ride. Misch took the same class as her friend, and by the end
of the day she was a motorcyclist.

Misch has laid down her bike a few times; once, in 2010, she broke her
back and punctured her lung in a wreck that nearly paralyzed her. But every
time she’s laid a bike down, “I’ve learned from it,” she says. In 2015, Misch
took her Indian Scout on a road trip around the U.S. People would stop her
at gas stations and ask bewildered questions like, “Are you riding that? Are
you by yourself?”

Last year, she went to Sturgis, with no windshield and a tent strapped to the handlebars, and met Lee Munro, the great-nephew of
New Zealander and “World’s Fastest Indian” Burt Munro, at a track race
nearby. Three months later, Misch was in New Zealand, riding with Munro
around the South Island, at his invitation. She agrees with Yazdi that
women riders are the future of the industry. “For every one woman rider,” she says, “you can bring in four men.”

The first leg of my ride with Yazdi lasts about five minutes before we
duck into Duke’s, a cheesy Hawaiian bar, for a beer and a backstory—hers.
When Yazdi was 11, her oldest sister died of a drug overdose. Two years later,
her father fell asleep at the wheel and collided head-on with a tanker truck at
70 miles per hour. He was in a coma for a year.

“I literally had to reteach my
dad how to talk. I was feeding him Gerber baby food,” Yazdi says. “I missed
a lot of things.” He suffered various complications over the next decade,
and in 2014 died of a burst growth between his aorta and his lungs. Yazdi
emerged from that trauma determined to live at the peak. She has never had
a nine-to-five job, and she has the physical beauty to keep it that way. But she wants more than Instagram likes of pretty pictures of herself.

For Yazdi, motorcycling represents a way to live life at its maximum
setting. Last year, she quit social media for three months, weary of a
virtual world full of click-based accolades. “I don’t need to be a social
media star,” she says. “It’s not a real thing.”

In December, tired of L.A. and
needing to recalibrate her life, Yazdi, her Australian shepherd, Kai, and
her Weimaraner, Moose, moved to the
frozen north, to Fairbanks, Alaska. Now
she’s organizing an event that will launch in
2019 in Hawaii, called the Aloha Way of Life
Festival, featuring music, motorcycles, surfing,
and art. “I wanted to be in a place I could really
launch something.”

What that looks like is weirdly simple, in
a way. The morning after we meet for beers, a
photographer and marketing guy for Indian joins
us for a day’s drive along the coast. Her job is just
to ride, and to look good riding, and to stop at scenic vistas along the way
and whip off her helmet and shake her hair and smile for the camera. My job
is to tag along and stand there awkwardly while she and Indian make a bit
of a scene on the PCH.

In one way, I’m watching a standard modeling shoot. But I’m also
watching Yazdi build a brand (herself) and a relationship (with Indian) that
she can leverage to sponsor the adventure rallies and festivals she creates.
“That’s how I tie all this stuff together,” she says.