This Electric-Hybrid Personal Helicopter Could Be Yours for a Cool $200,000

Arrive at your next meeting in style. 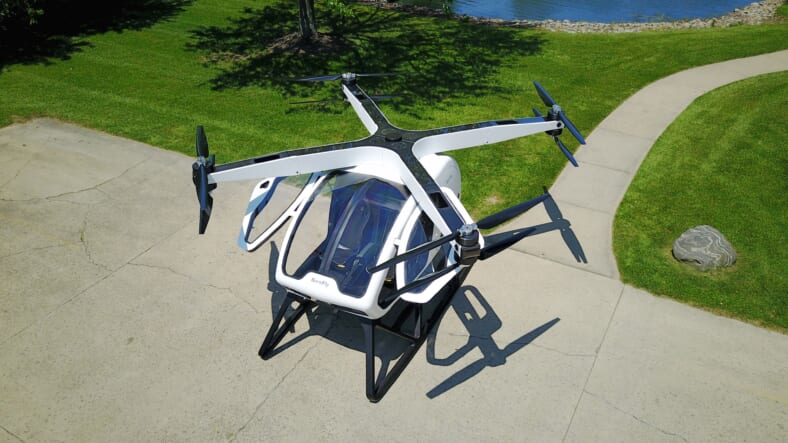 Ohio’s Workhorse Group has completely reimagined the helicopter as a 21st-century personal transportation device that overcomes the obstacles that have help back helicopter adoption by individuals.

The Surefly is compact because it eliminates the tail boom and relatively affordable, at $200,000.

It looks like a quad-copter drone, but it actually has two counter-rotating props at the end of each of the four carbon fiber arms.

Surefly is a series hybrid, with a gasoline engine driving generators that power the eight electric motors that individually turn each of the rotors. A pair of lithium ion battery packs provide emergency reserve power for five minutes of flight in case the gas engine fails. And if worse comes to worse, there is a ballistic parachute to bring the whole thing down to the ground safely.

It is a two-seater that can lift a maximum of 400 pounds, so keep its capacity in mind when eyeing those nachos during the next game.

The arms fold up, letting owners park the Surefly in a regular garage spot.

Surefly has a top speed of 70 mph, a flight ceiling of 4,000 feet and a one hour of flying range per tank of gas.

It sounds like just enough for you to fly straight into the future.