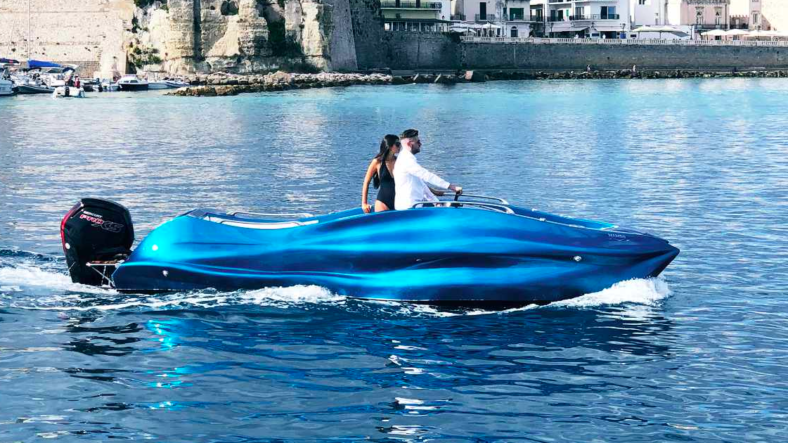 3D printing has been a low-key kind of tech, chugging along in the background for years. With Moi Composites’ creation of the MAMBO, which they say is the world’s first-ever 3D-printed fiberglass boat hitting the water at the Genoa Boat Show, it is in the spotlight again, demonstrating the extent to which a clever manufacturer can create a new product from scratch using good design and a powerful 3D printer.

Moi Composites calls their powerboat MAMBO, an acronym that stands for “Motor Additive Manufacturing Boat.” Robb Report tells us more about how it was made:

The unconventional boat was built using the Italian startup’s new continuous fiber manufacturing technology, according to a press release. Guided by a generative algorithm, the technique deposits continuous fibers into a thermosetting resin to produce a material that has the strength and durability of traditional fiberglass, but is much easier to shape and will save both time and money.To show off the new technology, Moi Composites has used it to produce a boat with striking design. The MAMBO isn’t big, measuring 21.5 feet in long and just over eight feet wide, but it packs a lot of originality into a relatively small footprint. The vessel features an inverted tricycle shape and has a hull covered with organic, flowing lines from front to back that call to mind the third-generation Corvette.

Robb Report suggests the lightweight boat is likely speedy as well, given its low weight of 1,763 lbs.

In their press materials about the MAMBO, Moi Composites writes that the “creativity of many designers today is suppressed due to various factors: technological, geometric limits, or production costs,” but “with CFM [carbon fiber manufacturing] technology, these designs can become real.”

Robb Report indicates Moi has no plans to mass-produce the MAMBO yet, but it will be on display at least one more day at the Genoa Boat Show. Whether owning this particular model of powerboat becomes practical one day or not, it does seem to predict a future of quickly-manufactured vehicles made for relatively low costs.