Take the ride of your life when the JetPack Aviation’s Speeder drops in 2023. 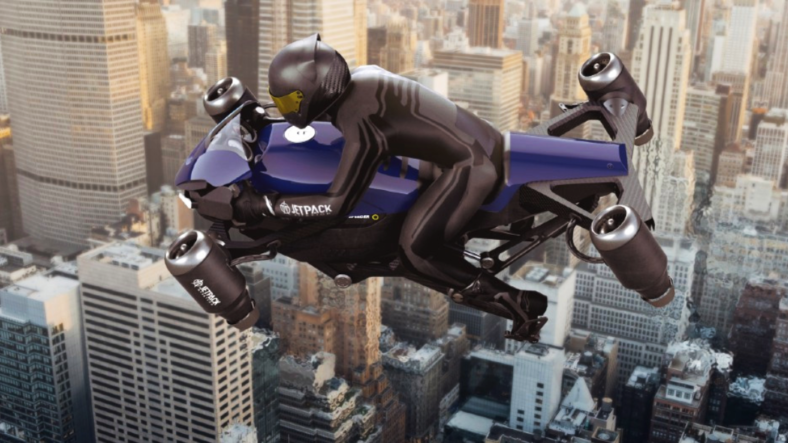 For anyone old enough to remember the kind of future sci-fi writers imagined in the 1980s and 90s, JetPack Aviation’s flying motorcycle, the Speeder, is going to seem like the fulfillment of a crazy dream you had after watching Return of the Jedi.

Sure, the Speeder is rendered in detailed CGI combined with actual footage in the video above, and the video has been around a while, as our 2019 article attests.

However, there is 2021 news on the Speeder front: According to the Robb Report, this sky bike is much closer to reality. We might see Speeders crisscrossing the wild blue yonder as soon as 2023.

The Speeder is an engineering feat that required Jetpack Aviation to write its own flight-control software program to monitor and adjust the thrust. The benefit of that work, which took a year and a half, is an intuitive system that functions like a typical motorcycle and automatically stabilizes the machine in flight. It can take off and land vertically from most surfaces in roughly the space taken up by a car, and it can be programmed to fly autonomously.“We could have an ultralight version [which requires no pilot’s license] ready within two years and an experimental category version within six months after that,” Jetpack Aviation CEO David Mayman told Robb Report. “The ultralight version would be limited to 60 mph (FAA rules) and a flight time of 15 minutes. The experimental version would require a basic pilot’s license to fly. The speed of this version would be approximately 250 mph with a flight time of about 35 minutes.”

The Speeder was initially conceived, as seen in the image below the video, with four engines. JetPack (so named because yes, they already make a jetpack) has boosted the number of turbines to eight for the kind of safety-minded redundancy already found in many aircraft, where the loss of an engine won’t necessarily cause a potentially fatal crash.

Here’s where this actual flying motorcycle‘s potential becomes even more interesting—according to Robb Report, the 2.0 version of the Speeder “will also offer impressive power, allowing the roughly 300-pound Speeder to carry 600 pounds, a size-to-payload ratio that sets the Speeder apart from other VTOL craft.”

JetPack is reportedly testing the newest version of the Speeder already and will no doubt continue tweaking and improving things over the course of 2022. One new detail noted by Robb’s J. George Gorant: “JetPack has made a deal with Prometheus Fuels, Inc., to use that company’s 100 percent zero net-carbon fuel.”

So the flying motorcycle will be eco-friendly as well.

On their Speeder page, JetPack Aviation offers some caveats that amount to telling consumers not to get too excited about cosplaying the forest chase scene from Return of the Jedi sometime in 2023: “We plan to build only 20 Recreational SpeedersTM. Future production will be dedicated to military and government.”

It appears the company will base plans for selling more to regular, recreational customers on demand.

That said, JetPack also provides a bullet list of everything a customer who gets in under the wire to snag one of those 20 “recreational” vehicles will receive:

Sweet, that is, as long as customers can afford the current list price for a Speeder. They’re going for $381,000—and JetPack is taking preorders already at jetpackaviation.com.