The attack on Pearl Harbor happened 76 years ago today. 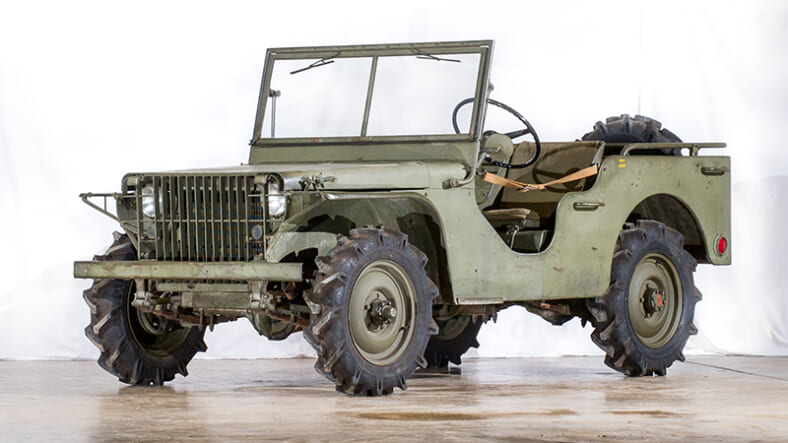 In 1940 most of the world was already at war, and in anticipation of America’s involvement, the Army asked carmakers to produce a small, lightweight “general purpose,” or GP, vehicle to move soldiers.

Automakers American Bantam, Willys-Overland Motors and Ford provided prototypes for testing, and of these, Ford’s GP-No. 1 (which the company branded “Pygmy”) is the sole survivor. Many of this vehicle’s design features were carried over into production by Ford and Willys, though Willy’s cheaper stamped steel slotted grille (featuring the now iconic seven slots associated with Jeep design) replaced Ford’s notion of a protective steel lattice.

This prototype, and the first 5,000 Ford-built Jeeps, employed a 30-horsepower modified Ford 9N tractor engine and 3-speed Model A transmission, but the more powerful Willys “Go-Devil” engine was used instead for the subsequent Jeeps.

The GP-No. 1’s original Firestone agricultural tires are long gone, so they’ve been replaced by the closest available modern equivalent. Today it belongs to the U.S. Veterans Memorial Museum in Huntsville, Alabama, and it has been entered into the National Historical Vehicle Register by the Library of Congress.

By the day of infamy at Pearl Harbor on Dec. 7, 1941, production Jeeps built by Ford and Willys were already on duty serving the U.S. and its European allies who were already at war. By the end of the war, the two companies had produced 641,230 of the ubiquitous machines.

With so few surviving veterans able to remember Pearl Harbor on its anniversary, Ford’s GP-No. 1 remains as a testament to the nation’s anticipation of the coming war.