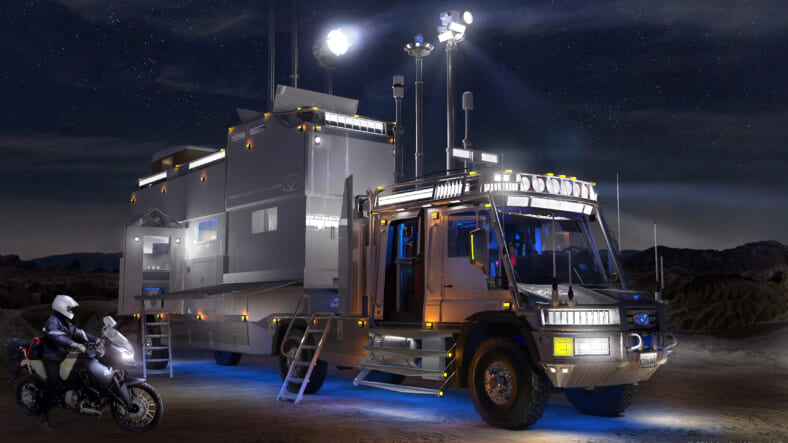 Some dads paint a bedroom pink for their little girls. Some might build them a treehouse, or take them mountain biking. Bran Ferran built a camping rig to rival the Desert Challenger RV so he could take his daughter exploring.

The KiraVan (named for Ferran’s daughter) is a truck-and-trailer combo that weighs 51,000 pounds and is meant to keep three people safe and comfortable anywhere in the world, at temperatures between -30 F and 130 F.

The truck is built on the chassis of the go-anywhere Mercedes UniMog and features its 260-horsepower, 700-lb.-ft. turbodiesel inline six-cylinder engine driving all four wheels. In really tough going, the trailer can use hydrostatic power to propel its axle too, for six-wheel drive at speeds up to 25 mph.

With a 170-gallon diesel fuel capacity, the KiraVan has a driving range of 2,000 miles on average terrain and carries enough food, water and other expendables to support the crew of three for three weeks without re-supply.

When it refills its 150-gallon fresh water tank, on-board particulate, ceramic silver anti-microbial, activated carbon, and ultraviolet filtration systems clean the incoming water, and and salt water can be desalinized by a reverse-osmosis filtration system.

Speaking of satellites, KiraVan navigates using data from America’s GPS satellite network, just like your car. Unlike your car, it also gets data from Russia’s GLONASS network, Europe’s Galileo and China’s BeiDou. When none of those are available, it falls back on an onboard inertial measurement unit.

The space rover-like masts hold optical imaging and ranging systems for surveying terrain from inside KiraVan. This includes long-range optics employing visible, infrared, and intensified night vision imagers. A bore sighted eye-safe laser rangefinder on the mast provides precision range of up to 25 miles to a reflective object.

The electro-optical system may be used to capture still images or film or may be used to automatically generate gigabit panoramas, permitting thorough photo-documentation of a site with centimeter precision.

And you’re keeping a photo album of your kid’s activities.