The 10 Most Brutal Baseball Brawls Ever, Ranked 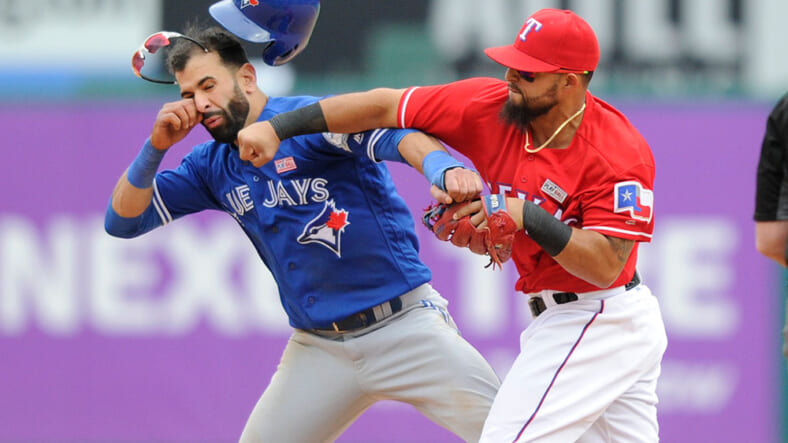 The Major League Baseball season is two weeks old, and until Wednesday tempers had remained fairly calm across the league. That all changed yesterday, when the Rockies and Padres engaged in some back-and-forth bean ball before benches cleared for a wild brawl in the third inning.

The tension started on Tuesday after Padres outfielder Manuel Margot was hit in the ribs, which landed him on the DL. On Wednesday, Padres pitcher Luis Perdomo retaliated by throwing at Rockies star Nolan Arenado, who bent his back to avoid getting hit and then charged the mound.

Hours later in Boston, things nearly popped off after Yankees outfielder Tyler Austin spiked Red Sox second baseman Brock Holt. Some chests were puffed, then order was restored. It didn’t last long. Austin was pegged later in the game by Joe Kelly and he charged the mound with malicious intent.

In an era when so many baseball “fights” don’t result in actual punches being thrown, these were two of the wilder melees in recent memory. But they’re not quite wild enough to land on this list of baseball’s all-time most brutal brawls.

We’re used to see fists and balls involved in baseball fights. But bats? That’s a bit much.

The highlight of this fight is the legendary Vin Scully’s commentary, including his lip reading and SFW translation of NSFW language.

Two things that make this brawl so memorable: That it came in the ALCS and Pedro Martinez throwing a 72-year-old man to the ground.

There was a big fight that followed this punch, but like most, it was just a mass of dudes pushing and shoving. Still, Rougned Odor’s overhand right remains one of the most perfectly landed punches in baseball history.

This is the brawl that never ends, yes it goes on and one my friends…

This is the wildest fight of a wild game that saw 15 ejections and fans led off the field in handcuffs.

Animosity between the Yankees and pitcher Bill “Spaceman’ Lee led to this brawl, which saw Lee get body slammed by Graig Nettles and sent to the DL for a few months.

Robin Ventura, who was a very good MLB player, is unfortunately best known for being a very good punching bag for Nolan Ryan.