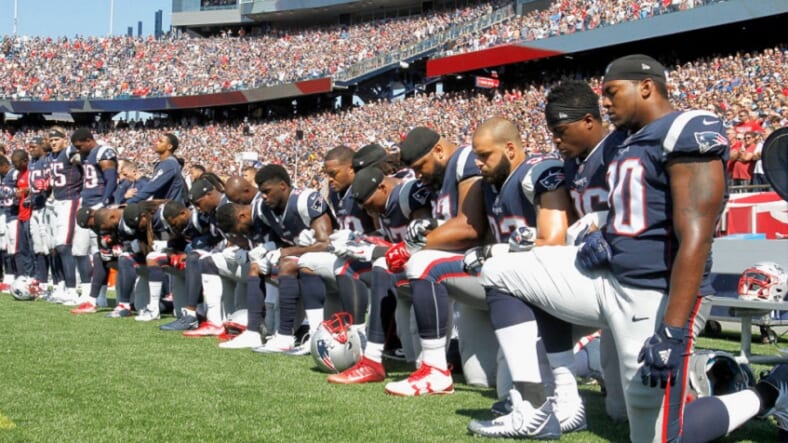 NFL players from the Jags and Baltimore Ravens in London to the Patriots in Foxborough, Massachusetts displayed a striking show of solidarity Sunday with one simple gesture. They took a knee.

The silent protest during the singing of the US national anthem was a direct response to President Donald Trump’s words regarding individual players who have done it in the past. The president, in a speech given in Alabama earlier in the week, called protesting players names and said they should be fired.

It wasn’t just football players making the gesture. Oakland Athletics catcher Bruce Maxwell became perhaps the first baseball player to protest in this manner prior to the A’s game against the Texas Rangers.

Those who didn’t kneel linked arms with fellow players in a gesture of solidarity—including Jaguars team owner Shad Khan, who was a Trump campaign donor.

Fans didn’t universally accept the protest. One of the most surprising reactions came from New England Patriots fans, who are known for their fierce pride in the team.

Many in Gillette Stadium actually booed the home team.

The Seattle Seahawks even issued an official statement regarding their protest.

Other teams chose a less visible protest and stayed in their locker rooms during the singing of the anthem.

One sport might not see much in the way of protest. The AP reported that NASCAR owners were unequivocal about it:

Richard Childress, who was Dale Earnhardt’s longtime team owner, said of protesting, “It’ll get you a ride on a Greyhound bus.” Childress says he told his team that “anybody that works for me should respect the country we live in. So many people gave their lives for it. This is America.”
Hall of Fame driver Richard Petty’s sentiments took it a step further, saying: “Anybody that don’t stand up for the anthem oughta be out of the country. Period. What got ’em where they’re at? The United States.”

CNN’s media reporter posted a statement from NFL commissioner Roger Goodell that indicated he was on the side of players and teams.

NFL says Trump's comments were "divisive," demonstrating an "unfortunate lack of respect for the NFL, our great game and all of our players" pic.twitter.com/Ur6FaMikET

While at least 100 players had participated throughout the day, the NFL schedule for Sunday wasn’t complete as of 5 PM.

There will likely be more protests to come.