Who will be taken number one overall? 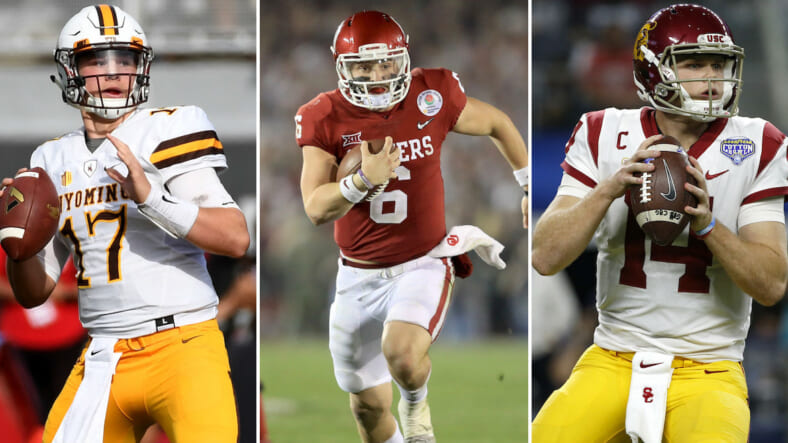 The NFL’s biggest off-season event kicks off in Dallas tonight at 7pm, when the months of speculation can finally end and the NFL Draft will finally begin.

There are still many unanswered questions about the proceedings. Will the Browns select yet another quarterback with their top pick? If so, which one? Will the Giants snag running back Saquon Barkley instead of an heir to Eli Manning? Will the top pick hug his mom after getting drafted?

These aren’t just things on the mind of football fans; they’re questions you can lay money on. Yes, as with most things sports-related, there are plenty of ways to bet on the proceedings in Jerry World this evening. The most interesting question this season, as always, is:

Who will be the first player off the board?

According to the oddsmakers at BetOnline, Baker Mayfield is the likeliest.

NFL insiders appear to agree. The Browns, who also have the number four pick, are likely to take Mayfield, ESPN’s Adam Schefter reported Thursday. The team has been tight-lipped about the choice, but everyone expects them to invest their top pick in a quarterback. Sam Darnold, Josh Rosen or Josh Allen could also end up landing in Cleveland, but increasingly it looks as if the shortest and most fiery one among that group will be next number one pick.

Not all experts are sold on the Browns taking Mayfield though. CBS’ R.J. White has them taking Allen, while three out of the four experts at NFL.com say they’ll take Darnold.

Will the top pick hug his mom?

The props over at BetDSI are a little wackier and they include one on whether the top pick will hug his mom before embracing Roger Goodell. The odds are firmly in favor of it.

How many quarterbacks will be taken in the first round?

Let’s assume Mayfield, Allen, Rosen and Darnold are gone before of the end of the first round. Do you think two more will go? Lamar Jackson and Mason Rudolph are first round talents, but they might fall lower. If you think they’re definitely not lasting past pick 32 though, there’s easy money to be made on this prop.

How many SEC players will be taken in the first two rounds?

One of most popular prop bets at William Hill, according to director of trading Nick Bogdanovich, centers on the number of players from the always powerful Southeastern Conference who will be taken in the first round. He’s got the over/under set at 19.5 with the over priced at plus-130.

Whose music will be playing when the first pick walks to the stage?

Our favorite prop of the night centers on the music that will be playing when the players walk up to the stage. BetDSI is laying odds on Drake, Future, Lil Wayne, Kendrick Lamar, Cardi B and Kodak Black being used at any point in the evening. Bet on them all.