What horse will finish fastest in the 147th Run for the Roses? Vote now on VersusGame on your phone! 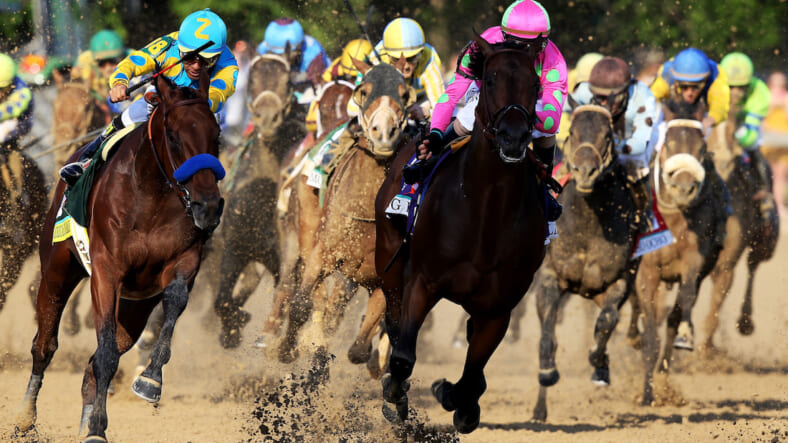 Will Essential Quality run the fastest time in the 2021 Kentucky Derby? Go to VersusGame on your phone to vote now!

The “Fastest Two Minutes in Sports” happening on Saturday, May 1, and fans of the world’s most famous horse race are placing their bets.

NBC will televise live coverage of the 147th running of the Kentucky Derby on May 1, while the big race’s precursor, the Kentucky Oaks, will be televised one day prior, Friday, April 30 on NBC Sports Network.

The undefeated Essential Quality has been anointed a 2/1 morning-line favorite and is definitely the horse to beat.

Does anyone put a stop to ESSENTIAL QUALITY's unbeaten record in the @KentuckyDerby? 🤔#KyDerby

But anything can happen in horse racing…Will Essential Quality run the fastest time in the 2021 Kentucky Derby? Go to VersusGame on your phone to vote now!

In the meantime, here’s a closer look at the top contenders, longshots and bombshots from the horseracing experts at Sports Illustrated:

Essential Quality drew the No. 14 position and was quickly tabbed as the morning-line favorite for the 2021 Kentucky Derby. This son of Tapit, who won the Breeders’ Cup Juvenile as a two-year old, enters the race off wins in the Southwest Stakes and Blue Grass Stakes. Brad Cox will have a strong chance to earn his first Kentucky Derby win with a horse who is undefeated in five career races.

The top connections of jockey Irad Ortiz Jr and trainer Todd Pletcher drew the dreaded rail for the Kentucky Derby. After adding blinkers, this son of Curlin, has responded with two impressive wins capped off by his victory in the Florida Derby back on March 27. Known Agenda actually holds the best speed figure of any Kentucky Derby hopeful. Todd Pletcher has found previous Derby success with Super Saver (2010) and Always Dreaming (2017) but he will be up against it after Tuesday’s unlucky draw.

Trainer Doug O’Neill, who won the Kentucky Derby with I’ll Have Another (2012) and Nyquist (2016), is back in 2021 with Hot Rod Charlie. The son of Oxbow was last seen winning the Louisiana Derby on March 20. Although he shocked many people when he finished second to Essential Quality in the Breeders Cup Juvenile at odds of 94/1, I do not envision him pulling off the upset in the Kentucky Derby. Hot Rod Charlie has only found the winners circle twice in seven career starts and my early lean is that despite drawing well he could struggle.

Chad Brown’s entry, by Into Mischief, was last seen losing by ‘a neck’ to undefeated Essential Quality in the Blue Grass Stakes. Highly Motivated initially peaked my interest as a value play who could pull off the upset with a clean trip. However, after drawing No. 17 jockey Javier Castellano may not find a comfortable stalking spot now. Highly Motivated (2-2-1) still could find a way to make it six consecutive times successfully hitting the board, but his chances took a hit after Tuesday’s draw.

With Concert Tour and Life is Good out of the Derby bettors are now left with Medina Spirit as Bob Baffert’s shot at another Kentucky Derby win. Baffert, who has six career wins in the Run for the Roses, has won three of the last five runnings with American Pharaoh in 2015, Justify in 2018 and Authentic last year. This son of Prontico will likely be gunned to the lead by John Velazquez who will look to be among the top flight from the opening gate. Drawing post No. 8 is an ideal spot and my lean is Medina Spirit could take enough money to go off at single-digit odds considering these connections won last year’s Derby.

Easily the biggest ‘forgotten’ horse in the Kentucky Derby field is one of Brad Cox’s three entrants – Mandaloun. The son of Into Mischief, has been inconsistent as a three-year old this year, with a win in the Risen Star sandwiched in between a disappointing sixth-place finish in the Louisiana Derby and third-place effort in the Lecomte Stakes. He has been training superbly in his morning workouts and at potential double-digit odds Mandaloun is a value underlay if he can run back to his potential.

This son of Tiznow looked great in his win in the Lecomte Stakes and is as consistent as they come hitting the board in all seven of his career races. Trainer Steve Asmussen adds Hall of Fame jockey Mike Smith in the irons for the Kentucky Derby. Smith, as we know, has found the winners circle twice in his career in the Kentucky Derby. This colt seems to always be up to the task and is not a horse that bettors should easily look to toss off any trifecta or superfecta tickets.

Hard to endorse this son of Orb who was last seen finishing third behind Hot Rod Charlie and Bourbonic in the Louisiana Derby back on March 20. He has shown improvement of late but his running style dictates that he will need to come from the clouds to find a way to hit the board on Saturday.

Following all the deflections from those ahead of him in the points leaderboard Ken McPeek finds his colt King Fury drawing into the 2021 Kentucky Derby. The son of Curlin looked impressive in his win in the Lexington Stakes at odds of 18/1 as well as also recording two of his three career victories over the Churchill Downs surface. King Fury is easily my favorite bomb longshot to use on all exotic tickets.

He ran well in the Wood Memorial before fading in the stretch finishing runner up to Bourbonic. This son of Union Rags is sure to get attention on Derby Day as an exotic target who would be a massive upset to find the winners circle.

This horse shocked horse players when he rolled past Caddo River and Concert Tour in the Arkansas Derby back on April 10 at odds of 12/1/. The son of Dialed In has improved in each of his last three races and according to my formula his recent form tells us he projects as one of the top closers in the race who could pick off tired runners deep in the lane – but the No. 18 hole makes it tough now to envision potentially hitting the board at healthy odds.

He joins Helium for trainer Mark Casse as a longshot entrant who only has one stakes race in his career – finishing runner-up to Known Agenda in the Florida Derby on March 27. His morning works at Churchill Downs leading up to the Derby have been quite impressive, but his draw of the No. 19 position makes him likely a toss for me.

Bourbonic shocked the racing world in his last start when he won the Wood Memorial at odds of 72/1 beating both Derby hopefuls Dynamic One and Brooklyn Strong. The son of Bernardini closed from the clouds to edge out his stablemate Dynamic One who also comes from the highly respected Todd Pletcher barn.

Won the Jeff Ruby Stakes back on March 27 at odds of 7/1 beating Sainthood by a head at the wire. This son of Palice Malice most likely was a target of the superfecta position at best but after Tuesday’s draw is likely a toss who will go off at higher odds than 50/1.

Sainthood is always a horse that can be found among the top finishers in his three career races. According to those trackside Pletcher has been very happy with his training leading up the Kentucky Derby. He is a horse who offers moonshot value to use on the bottom rung of exotic tickets, but this draw did him no favors to accomplish that.

One expected ‘wise guy’ horse could very well be Mark Casse’s lightly raced Helium who won the Tampa Bay Derby back on March 6. At attractive longshot odds this son of Ironicus could really spice up exotic payouts if he could find a way to hit the board.

Hidden Stash’s record shows a runner-up finish to Helium in the Tampa Bay Derby followed by a fourth-place finish behind Derby favorite Essential Quality in the Blue Grass Stakes. Don’t see his running style or speed figures making him usable on Saturday.

Posted a solid third in the Breeders Cup Juvenile last November but his two races this year as three-year-old have been disappointing, to say the least. He finished fifth in the Rebel Stakes and sixth in the Blue Grass Stakes. His running style coupled with his recent form and drawing inside at No. 4 makes him hard to endorse.

Brooklyn Strong draws into the race despite only earning 10 Kentucky Derby qualifying points thanks to all those who have been removed above him on the leaderboard. Being a Brooklyn native, my heart will be rooting for him but my wallet will not be supporting him.