25 Reasons Why Andre The Giant Was Larger Than Life

The wrestling legend died 25 years ago this week, but his legend continues to grow bigger and bigger. 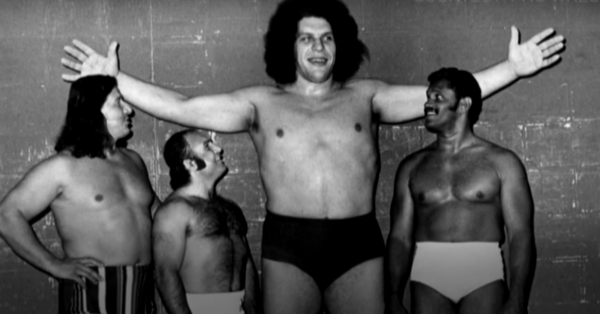 Twenty-five years ago this week, Andre Russimof, known to the world as Andre the Giant, died in his sleep in Paris. He was only 45—which is at least doubled in giant years.

In April, HBO is releasing the definitive documentary on the “The 8th Wonder of the World,” as Andre came to be known during his barnstorming days as the biggest celebrity in the world. Literally.

A quarter century after his death, Andre still occupies mythical status in American pop culture, thanks in part to the legends that are still told about the 7-foot-4, 477-pound Frenchman. Here are some of our favorites:

1. By the time he was 12, Andre already stood 6-feet-three-inches tall and weighed 200 pounds.

2. That made him too big to fit on the school bus, so he regularly hitched a ride to school with his neighbor, playwright Samuel Beckett.

3. Andre grew so rapidly that, after spending five years away from his parents as a teenager, they failed to recognize him when he returned home. In fact, they’d seen their own son wrestle on TV without realizing it was him.

4. As a young man, Andre was drafted into the French military but had his service excused after it proved too difficult to find shoes and a bed big enough for him.

5. Depending on whom you ask, Andre has drank as much as 156 beers in a single sitting. Asked about his ability to imbibe on Letterman, he admitted to drinking 117 beers in one sitting.

7. Traveling was such a burden for Andre that Vince McMahon Sr. had a van customized just for the giant. The ceiling was raised and an oversized couch was installed, allowing Andre to avoid squeezing into planes and cars.

8. Andre was so huge that when his good friend Hulk Hogan body slammed him at Wrestlemania III, the Hulkster suffered injuries that have lingered for decades.

9. While traveling in Japan, where everything was too small for Andre’s liking, he was known to rip the door off hotel bathrooms so he could take a dump while stretching out his legs.

10. And if that didn’t work, he’d just use the bathtub as a toilet.

11. After one night of hard partying, Andre passed out in a hallway and his friends, fearful that Andre would have the cops called on him, disguised the big man by draping a piano cover over him.

12. Andre liked pranking friends in France by picking up their small cars and moving them into inconvenient places, like between a building and a lamppost.

13. Andre’s body wasn’t the only big thing about him—his farts were giant too. According to Jake the Snake Roberts, Andre once farted on him for 30 straight seconds.

14. During the filming of Princess Bride, Andre racked up an astonishing $40,000 bar tab, according to one estimate.

15. Actor Cary Elewes remembers Andre drinking not from a glass, bottle or mug, but from a pitcher that could hold 40 ounces of beer at a time.

16. He sometimes drank six bottles of wine before getting into the ring.

17. Andre was so big that he once got into the front seat of a cab and couldn’t close the door.

18. So big that his fat fingers were obsolete when it came to dialing an old rotary phone. He used a pencil instead.

19. So big that he was never able to pursue a career as a pianist, what with this baguette-sized fingers making it impossible to press one key at a time.

20. So big that his over-sized fingers were once described by an old wrestling buddy as “cock fingers.”

21. In fact, the circumference of Andre’s fingers were equal to that of a silver dollar.

22. His giant hands also came in handy on the set of Princess Bride, where he used them to cover Robin Wright’s entire head to keep her warm.

23. After one dinner with Wilt Chamberlain and Arnold Schwarzenegger, Andre and the NBA legend carried Arnold to the restaurant parking lot and dropped him on top of a car.

24. Andre was so huge that before surgery an anesthesiologist had no idea how much anesthesia was needed to knock him out. So he asked about his alcohol tolerance and used that as a guide. “It usually takes two liters of vodka just to make me feel warm inside” he told the doc.

25. After his death in Paris, Andre had to be flown back to the U.S. for cremation becuase there was not a crematorium in France large enough to handle his massive body.