25 Fun Facts About ‘The Sandlot’ On Its 25th Anniversary

Test your knowledge of the greatest coming-of-age baseball movie ever. 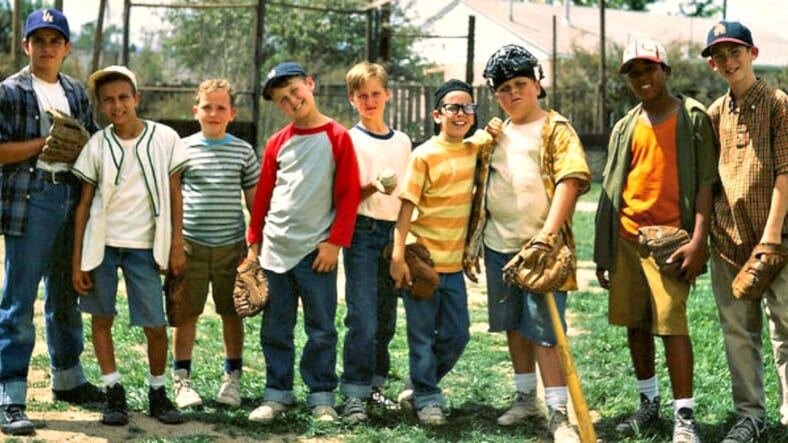 1993 was a banner year for bad sports movies that you saw as a kid and still think are good. Cool Runnings, Rookie of the Year and Rudy were some of the year’s top offerings. But in April of 1993, The Sandlot kicked things off with two of the elements we love most in sports movies—adolescent hijinks and nostalgia.

Now, 25 years later, the stars of The Sandlot have all grown up—some more than others—but the movie’s fans have not. Which is why now, even though you’re probably closer in age to the movie’s adults than its children, you’ll eat up these facts about The Sandlot like a s’more.

1. The original title was The Boys of Summer, but it was changed to avoid a threatened lost by author Roger Kahn, who published a book of the same name in 1972.

2.  Writer, director and narrator David Mickey Evans ripped the story from real life. His brother, like Scotty Smalls, was an outcast who tried to get on the good side of some local kids by retrieving their baseball from the yard of a ferocious dog.

3. In his three-star review of the movie, Roger Ebert compared The Sandlot to A Christmas Story: “Both movies are about gawky young adolescents trapped in a world they never made and doing their best to fit in while beset with the most amazing vicissitudes.”

4. Not all critics loved the movie. Janet Maslin, long of The New York Times, said Evans wrote and directed The Sandlot “as if it were stunningly momentous, even though nothing about his modest coming-of-age comedy demands anything like this awestruck approach.”

5. The entire set was man-made. The sandlot, the house, the backyards, and everything except for the giant oak tree that held the boys’ treehouse, was built specifically for the film.

6. The oak tree was real, but it wasn’t alive. While driving around Salt Lake City one day, the movie’s production designer saw a man cutting down the tree and asked if he could have it. The crew rented a flat bed truck and moved the tree to the set, where it was cemented into a giant hole. “It was a great save,” Davis told Sports Illustrated in 2013.

8. The Beast was played two different English mastiffs, except for the times when it was played by a puppet that took two people to operate.

9. The puppet was built by animatronics designer Rick Lazzarini, who also designed costumes for Spaceballs.

10. In the scene where The Beast and Smalls make friends, actor Tom Guiry had baby food smeared on his face to get the dog to lick him.

12. The older Benny at the end of movie was played by Vitar’s real-life brother Pablo Vitar.

13. The vomit scene, which features “Tequila” by The Champs, was originally supposed to be scored with the song “Wooly Bully” by Sam the Sham and the Pharaohs. They wanted more money than Evans was willing to pay though.

14. The Big Chief chewing tobacco that made the boys puke was made from beef jerky and licorice.

15. And the puke? It was made from split pea soup, baked beans, oatmeal and water.

16. It was extremely hot during shooting, with temperatures topping out at around 110 degrees.

17. But it was seriously cold during the pool scene. Evans remembers the water being around 56 degrees. “If you look closely when Squints is staring at Wendy Peffercorn, his teeth are actually chattering. It’s because he’s freezing to death,” he told SI.

18. Marley Shelton, who played Wendy Peffercorn, proved as popular with the actors as her character was in the movie.

19. The dialogue in the scene where the boys are watching Wendy—”She don’t know what she’s doing.” “Yes she does, she knows exactly what she’s doing”—is a reference to a similar exchange in Cool Hand Luke.

20. Evans recalls that he had to give Chauncey Leopardi, who played Squints, a stern warning before his famous scene with Shelton: “You keep your tongue in your mouth, you understand?”

21. Wendy was inspired by a real lifeguard Evans knew as a kid. Her name was Bunny.

22. In 1994, a childhood friend of Evans who says he was inspiration for Squints, sued 20th Century Fox “for invasion of privacy and exploitation of his likeness.” Though the court found that he did appear to be the inspiration for the character, his suit was tossed out.

23. When they weren’t busy filming, the cast of the movie got into a bit of trouble, such as sneaking into a screening of the R-rated Basic instinct.

24. There have been two sequels of The Sandlot, but Squints is the only character from the original to show in either of them.

25. For the movie’s 20th anniversary, Evans took The Sandlot on a tour of minor league parks around the country.