This is NOT the way to put an end to the violent sport. 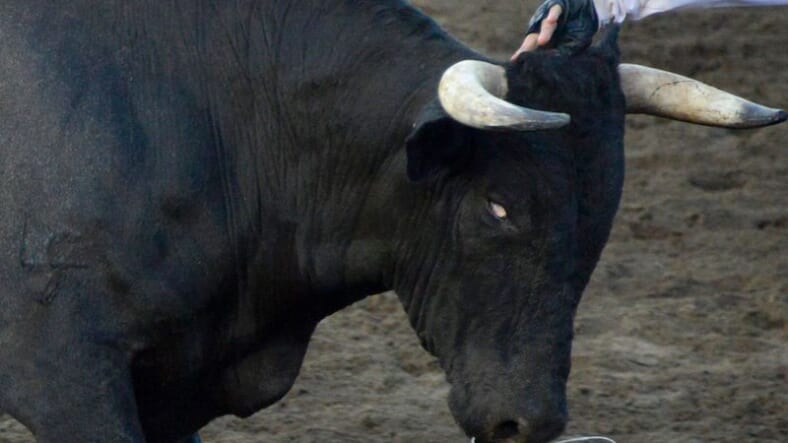 Bullfighting is bullshit. Everyone, outside of the few barbarians keeping the “sport” alive, knows this. It’s why we’re always glad to see bulls pull off the upset and put a horn through a matador’s eye.

But opposition to bullfighting is best expressed by lobbying to change laws with creative protest, not by jumping into the middle of a bullfight and trying to stop it. That’s just what one dumbass animal rights activist recently did in France, and he’s now got the scars to prove it.

As the video shows, two people jumped into an arena during a bullfight in southern France. After prancing around the center of the ring, out of the bull’s eyesight, they were spotted. That’s when things got hairy. AFP reports:

One bull charged at the man who, according to police a received “a long but not deep” injury from its horns.He was taken to Carcassone hospital for examinations. His female companion was not inured and was arrested by police.

The protester, in his 30s, “was very lucky” that he was not properly gored and was only lightly injured, another source said.

The protesters made their feelings on the bullfight known earlier in the afternoon when they hung a banner that read “Stop Bullfighting.” A simple message, to be sure, but one that most of us can agree on. And one that’s being heard more and more in France lately.

Bullfighting is illegal in most of the country, but small pockets in the south of France still hold the events to honor local traditions. Recently, animal rights activists have been using this tactic of jumping into the bullfighting arena in an attempt to shut the event down. The topless men tend to have messages written on their chests and backs. But instead of being trampled by the bulls, they’ve been tackled by matadors and police, which looks a lot better than what happened to their vegan brother above.