“These owners can cancel deals do whatever they want at anytime…” 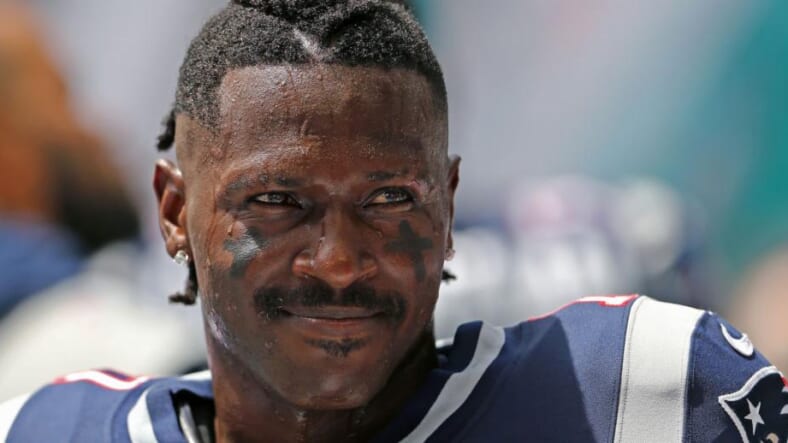 Antonio Brown has had it with the NFL.

Brown, who was let go by the Raiders then picked up by the New England Patriots just long enough to embarrass the team after it became public that at least two women allege he raped them, tweeted his decision Sunday morning.

Will not be playing in the @NFL anymore these owners can cancel deals do whatever they want at anytime we will see if the @NFLPA hold them accountable sad they can just void guarantees anytime going on 40m 2 months will see if they pay up !

“Will not be playing in the @NFL anymore,” Brown wrote, “these owners can cancel deals do whatever they want at anytime we will see if the @NFLPA hold them accountable sad they can just void guarantees anytime going on 40m 2 months will see if they pay up !”

It kind of sounds like he’s saying “You can’t fire me, I quit,” to the Patriots.

The team dropped him like a hot potato on Friday, Sept. 20, giving the following terse statement:

The New England Patriots are releasing Antonio Brown. We appreciate the hard work of many people over the past 11 days, but we feel that it is best to move in a different direction at this time.

Shortly after the Pats signed Brown, the likes of Julian Edelman and Tom Brady seemed stoked on the guy.

Then the news broke that Brown had been accused of rape—allegations the Patriots claim they weren’t aware of. From NPR:

Two women have accused Brown of sexual misconduct. Former trainer Britney Taylor has filed a civil lawsuit against Brown — accusing him of rape and sexual assault on three occasions. The lawsuit became public last week, and Taylor has had meetings with the NFL.Sports Illustrated reported this week that another woman said Brown sexually harassed her while she working at his home — she turned around to find him standing there naked except for a small towel covering his genitals.

It’s understandable that the Patriots might want to do whatever they can to get the hell away from any whiff of player-centered controversy, after it turned out star receiver Aaron Hernandez was also a serial killer. No one wants the “Patriot’s Way” to include alleged sex predators or homicidal maniacs.

Brown is no doubt angry in part because his one-year deal with New England was made up of a $9 million signing bonus and he was guaranteed a $1 million base salary. With his dismissal it’s likely the team will do what they can to avoid having to—in Brown’s words—”pay up.”

It won’t help to know that the XFL won’t want him either. A rep for the rebooted league told Pro Football Talk that “that the fledgling spring league is not interested in Brown.”

According to an ESPN report, “NFL rules allow a player, once in his career, to file for and collect termination pay if he is released by a team.” So it could be that Brown will retire in some style, anyway.

Unless, that is, he ultimately ends up using all that money to fight rape-related civil lawsuits.