The star wide receiver argued that the NFL’s new helmet interferes with his vision and affects his ability to catch a football. 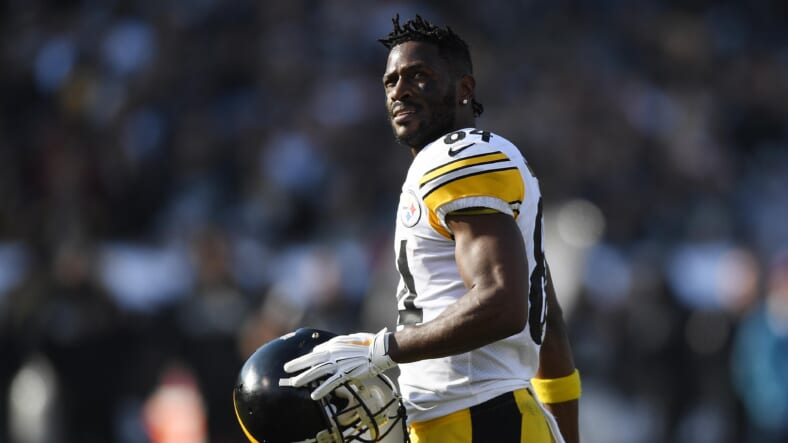 It’s official: Antonio Brown will not be allowed to wear his old helmet while playing his first season with the Oakland Raiders.

The star wide receiver argued why he should be able to use what’s believed to be a 10-year-old Schutt Air Advantage helmet in a two-hour conference call with an independent arbitrator last week.

Unfortunately, that particular model is no longer certified for practice or games by the National Operating Committee for Standards and Athletic Equipment because of its age, ESPN reports.

An arbitrator ruled against Raiders’ WR Antonio Brown’s grievance to wear his old helmet, per source.

Now Brown must decide if he’s willing to play football with a new helmet he desperately does not want to wear.

Brown claimed that the new certified helmet interferes with his vision and hampers his ability to catch footballs.

Citing an anonymous source, ESPN’s Adam Schefter said that the arbitrator has “ruled against Brown’s grievance” in a “very kind denial.”

In an Instagram post, Brown wrote that he is “looking forward to rejoining” the Raiders on the field, adding that he appreciates concerns from fans over a cryotherapy accident that left him with injured feet.

Brown is now looking for a newer version in the style of his preferred helmet. Even if he could get one certified, it’s unclear as to whether the NFL would allows use of an outdated technology.

Schefter’s source added that an appeal from Brown is “very unlikely” and that he is expected to rejoin the Raiders training camp in Napa today.

It is considered very unlikely that Antonio Brown will appeal today’s decision from the arbritrator, per source.

Antonio Brown will be back at the Raiders’ facility in Napa today, per source.

Brown signed a three-year, $50.125 million contract with the Raiders after the team traded a third and fifth-round draft pick to acquire the seven-time Pro Bowler from the Pittsburgh Steelers.

Despite Brown’s fuss over his headwear, Raiders head coach Jon Gruden has expressed support for his new starter.

“He has a strong feeling about what he’s worn on his head, and we’re supporting him,” Gruden said after Saturday’s exhibition against the Los Angeles Rams.

“We understand the league’s position as well, so we’re in a tough spot, and we hope Antonio is here soon because he’s exciting to be around. I’m excited.”

“I’ve got some plays for him,” Gruden added. “I hope we can start calling them.”