“WTF even going on in Russia?” 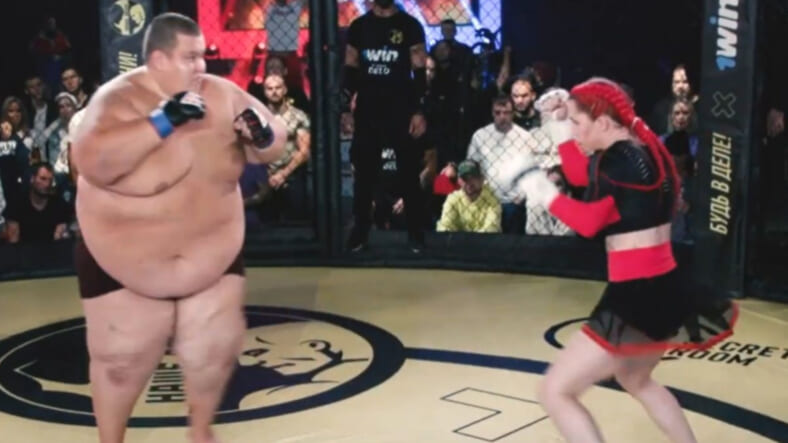 Despite holding only a budding 3-1 professional record, MMA fans may already be familiar with Bellator’s newest female flyweight cage fighter.

Darina Mazdyuk made a bout by obscure Russian MMA promotion “Our Business” go viral when the 139-pounder knocked out her 529-pound male opponent Grigory Chistyakov in a sensational intergender exhibition.

MMA Fighting reports that the fight lasted just 90 seconds, with Mazdyuk winning by TKO after pummeling a fallen and exhausted Chistyakov into the mat.

BREAKING: @BellatorMMA has signed Darina Madzyuk (3-1) to an exclusive contract. She will compete at flyweight and went viral earlier this month for KOing this 529lb man in Russia….pic.twitter.com/MCy5Tsz7od

This is what we are dealing with – in 2020. This is what we are fighting against as the parallels & negative connotations are continually drawn. To outsiders & detractors this is MMA. Shameful. Sickening. Abysmal. 😔 https://t.co/lWDyXy7R0z

UFC fighter Ben Askren also had an incredulous reaction, tweeting “WTF even going on in Russia.”

WTF is even going on in Russia https://t.co/JXQ1B71m0u

Mazdyuk may be taking some heat online as well. The “Red Queen” recently set her Instagram page to private, despite having over 35,000 followers.

But given Mazdyuk’s sensational knockout of her roly-poly opponent, we’d say she can definitely lay claim to some kind of “pound-for-pound” ranking–based on her victim’s impressive corpulence alone.