You’ve gotta see this to believe it. 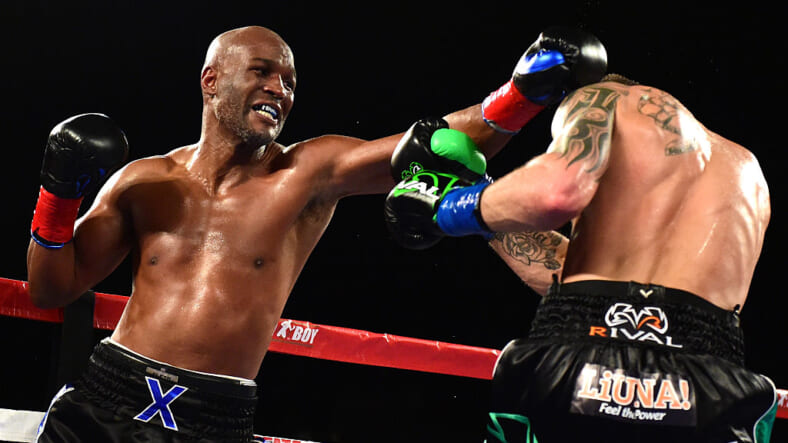 Boxing was his escape from a life of crime, and in the end he had a longer and more storied career than most fighters could ever dream of. But after his match against Joe Smith Jr. Saturday night, an aging Bernard Hopkins finally said farewell to the sport, nearly three decades after he began.

The man alternately known as “The Executioner”—he defended his middleweight title a record twenty times— and “The Alien”—he became the oldest boxing champion in history when he clinched the light-heavyweight crown in 2011 at age 46—wanted at least one more win to cap his astonishing 67-bout career, but the 51-year-old legend was on the bad end of a TKO instead, Smith knocking him right out of the ring in round 8 with a powerful combination. Hopkins claimed he was pushed out, but a look at the exchange clearly indicates that Smith took out his aging opponent with raw punching power.

Watch: @beastsmithjr knocks @THEREALBHOP out of the ring 53 seconds into round 8, ending the fight. #Final1 https://t.co/Pj2svLUlC9

Hopkins still scored one for every middle-aged fan rooting for him to end his career on a high note, as he was on his feet quickly and ready to keep going. Only an official call for the end kept him from climbing back in the ring.

Yahoo Sports noted that this was Hopkins’s only loss by knockout. He ends with a record of 55-8-2.

Speaking on HBO after the bout, Hopkins stoutly stuck to his claim of being pushed. He said that he knew “for a fact” that if he hadn’t been “pushed out of the ring after I had made him miss, the second half of the fight — where I’m known for coming back and I’m known for going after it when I’m down multiple rounds — I believe he was starting to fade out.”

Hopkins did admit he was hurt, and suggested his advanced age, and everything that comes with it, made the difference. “I hit my head first and my ankle got hurt,” he said, “Between the ankle and the back of my head hitting the ground, I feel worse now than I felt when I was 25.”

While any objective look at the fight had to give Joe Smith Jr. the advantage, the fiery competitive spirit that gave Hopkins his amazing longevity was still on display in what seemed a refusal to admit his loss. “Even if they would have called it a no-contest or called it a whatever,” he said, “but not a loss, because I don’t think it was warranted like that.”

Hopkins, a Philadelphia boxing institution who served 5 years in prison in the 1980s, is so old that his first fight (which he lost) was on October 11, 1988. That’s when Ronald Reagan was still president.

Meanwhile, Smith, who is nearly half Hopkins’s age, said he was simply doing what he was supposed to do. “…[This] is my coming out party, too,” he said, “I had to finish him. It was either my career was going to end or his was going to end. I needed mine to continue.”

Bernard Hopkins’s status as an icon of the sport was already set when he set the seemingly unbreakable record of oldest fighter to win a world title. Regardless of the crazy outcome of the match against Smith, Hopkins will take his rightful place Boxing’s Hall of Fame when all is said and done.