This is absolutely hysterical. 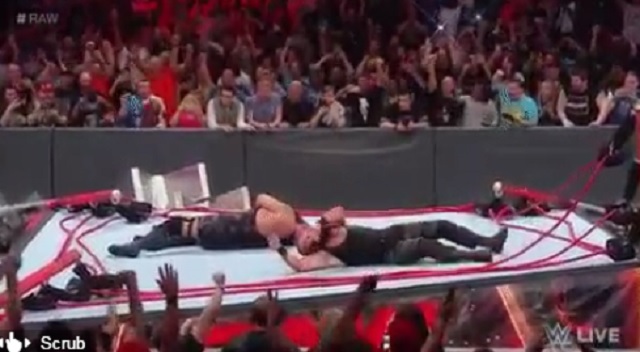 Whether or not you’re a fan of the ludicrous male soap opera that is professional wrestling, you gotta give it up for a stunt like this.

On Monday Night Raw, Braun Strongman took the newly-svelte behemoth known as the The Big Show to the top rope, and suplexed him so hard that the freakin’ ring just happened to collapse.

The impact of two colossal Superstars leads to one INSANE ring collapse in our main event! @BraunStrowman @WWETheBigShow #RAW pic.twitter.com/bb1WvDRXGZ

Judging from the glee on the crowd’s faces, you know this wasn’t a typical wrestling move. Watch the videos above, and proudly soak in this uniquely American spectacle.

Just in case you were wondering, the show-ending stunt wasn’t the first time a WWE ring has dramatically collapsed.

Big Show has crashed the ring twice before—once with Brock Lesnar in 2003 and once with Mark Henry ion 2011.