Get inside the head of one of the best in the world. 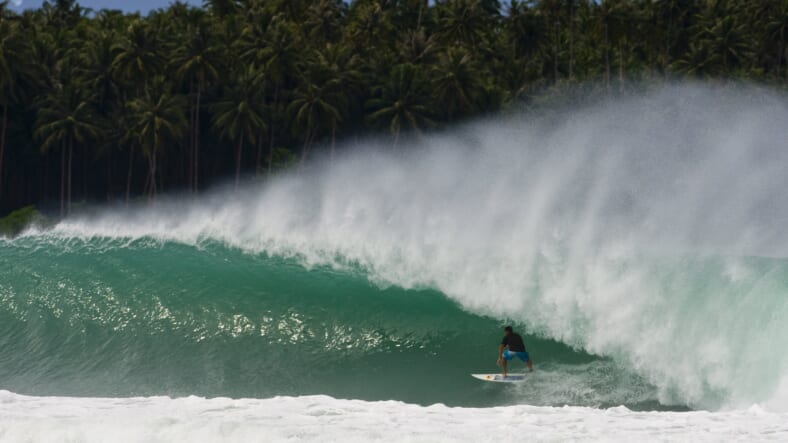 Even in a world of big waves and big names, Ian Walsh stands apart. The Maui-based surfer has built his reputation on tackling mountain-size waves at surf spots from Portugal to Hawaii, California to Tahiti. You can catch Walsh riding eight-story swells in Distance Between Dreams, a new documentary he produced with Red Bull. The world-class surfer spoke with Maxim about the dangers of big-wave surfing, the challenges of chasing storms around the world, and how to use culinary recipes to avoid drowning.

On Distance Between Dreams:

The motivation for me was just to put all of my time and energy into a project that would time-stamp a period in surfing’s progression. I narrowed my focus into the singular goal of doing this film, and we got very lucky. It was a two-year project, and the bulk of it was shot over the last year, which was a historic winter for big waves. The first year was lackluster, but then we happened to catch the most incredible winter in big-wave surfing history.

El Niños like the one we experienced are pretty rare, and when you’re at the peak of your career you might only see a couple of them. This one was really unique because we got massive 60 to 70-foot surf, but the weather was light so there weren’t any of the big winds or rains that can destroy ideal conditions. It had all the makings of these massive swells but with perfect weather.

On being an amateur meteorologist:

The process starts by looking at satellite images of a projected swell, typically seven days out. Two days will pass and that projected swell might turn into the real thing, and I’ll check the data on wind speeds and sea heights. Finally, 24 to 48 hours before the time the swell arrives is when I get a really good understanding of what’s going to be coming. I’ve become a complete geek on Google Earth.

I follow the updates to the last minute, literally pushing my travel plans as far back as I can. Sometimes I’ll be halfway to Morocco, South Africa, Australia, or Tahiti and the system will just fall apart while I’m en route. I’ll land, and the swell isn’t what I had thought it would be. You’re never really in control, and that can be frustrating. But it’s also what makes it so special when everything comes together.

On the preparation required to survive surfing the world’s biggest waves:

A lot more goes into this sport than what typically gets shown, and showing the audience the behind-the-scenes work we put in was a big part of the film. It all starts with preparation. There is a really heavy routine in the gym, pool training with breath holding, and open ocean diving down to 155 feet to better understand time and pressure underwater. We also spend a lot of prep time on our safety procedures, as everyone works to create a seamless, compact team, because if something really bad happens we’re all that we have. Fortunately for me, my brothers and I have developed a procedure through trial and error that allows us to look out for each other, and if something catastrophic happens, to neutralize and deal with it ourselves.

I do get scared, but that’s part of the fun for me. Instead of seeing fear as a big wall in front of me, I use it to propel me forward. Sometimes when you’re scared, that’s when all of your senses are turned on, everything’s heightened, and you’re completely focused on one particular moment. When you’re paddling you can see the whole horizon stand up like a building, and your natural instinct is to try to get out of the way of it. But to catch it you have to stay, and you think, It might break on me, it might not, but that’s the only way I’m going to have an opportunity to catch it. You’re committing really early to a very heavy risk. That’s when the fear and anxiety and nerves are starting to build. But as I commit to the wave and turn around, that’s when everything drifts away. Once I mentally commit to a wave, everything kind of steadies and slows down.

As for sharks, the shark factor is looming in the back of your mind, but focusing on that would be like walking to your office and worrying about getting struck by lightning on the way.

On hobbies that help his surfing:

Cooking has helped my surfing a lot. I have such bad A.D.D. that a lot of the time I spend underwater I’m thinking about the seconds and minutes I’ve been submerged. To subdue that I’ll go through an entire recipe in my head while I’m underwater. When I’m halfway through making a rack of lamb, I’m at two and a half minutes; when the meal is done, I’m close to five minutes. If I was thinking, OK, I’m at four minutes, 28 seconds, I’d never make it to five minutes. But if you’re thinking about rosemary and a mustard crust, it goes a lot quicker.

There are countless hours where I just roll around in bed. I mean, I’ll surf for seven or eight hours and will probably spend more time thinking about the waves I missed than the waves I made.

On surfing as a lifelong pursuit:

Whether I was surfing professionally or working in a restaurant every night, I’d still be surfing all day. That’s part of what makes this sport unique. When you retire from being a professional surfer it’s not like in the NFL, where you hang up your cleats and then you might go coach a high school team. I’ll be surfing as long as I’m breathing, whether I can walk or not. I’ll just be on a solid retirement plan on Honolua Bay on Maui, borrowing some waves from the little kids.