He’s beefing up big time for his upcoming match against Kevin Owens. 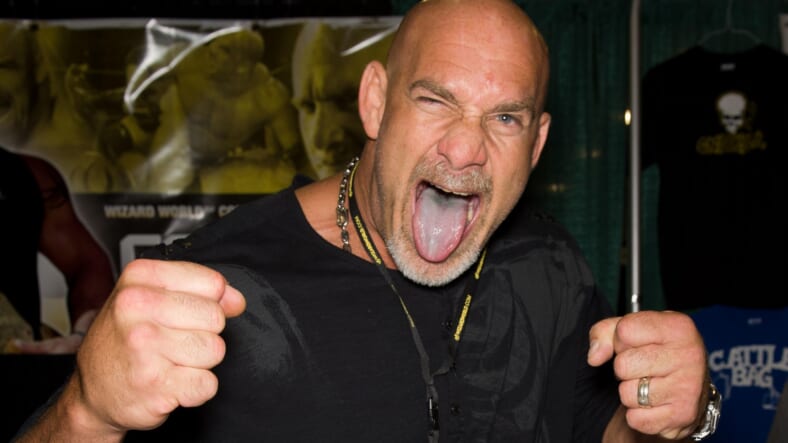 In an interview with GQ, professional wrestling legend Bill Goldberg revealed just how much food he’s been packing down to prepare for his WWE Fastlane match against Kevin Owens this Sunday, and ho-ly shit.

The 50-year-old fitness freak told the mag that he’s always had a fast metabolism, and because he hasn’t stepped into the WWE’s ring since Armageddon 2003, he had just six weeks after signing his contract to make up for 12 years of losing weight.

Fox Sports pulled all of the mentions of food to show his daily meal regimen. Check it out below:

“The first breakfast I had today, I had six servings of oatmeal, 20 blueberries, and a couple tablespoons of honey on it. Then I trained.
Afterwards, I had twelve eggs with two yolks, six pieces of bacon, four pieces of gluten-free toast with avocado. Then a shake.
After that I had two gluten-free pizzas with loads and loads of hamburger meat for protein on top of it. Then another shake.
My son and I are about to go to Muay Thai, but on the way we’re going to have some pho. Some soup and noodles, some shrimp.
Then I’ll do some training at Muay Thai and on the way home we’ll get some pho again for dinner, because the wife hasn’t eaten it yet today.Then I’ll do the family thing, and then I’ll eat again. I don’t know what I’ll have this evening. Probably… I don’t know. I do this meal service called Regiment Meals, and they’ve helped me out tremendously because one of the biggest issues is food preparation.
…Tonight, I’ll probably do some beef tips and sweet potato fries and an avocado and probably another shake. Then I’ll go workout again, and I’ll have another shake after that, and I’ll do my cheat, which is popcorn.”

He claims his food intake at least doubled following the deal, and for his sake we hope that’s true, because eating just half this amount of food would be a ridiculous feat.

While it’s not quite as crazy as the literal ten pounds of food GOT’s “The Mountain” shovels into his mouth, we still don’t recommend trying to take on this Herculean amount of sustenance at home.