Fury’s cuts were so bad, his planned rematch with rival boxing champ Deontay Wilder could be delayed while they heal. 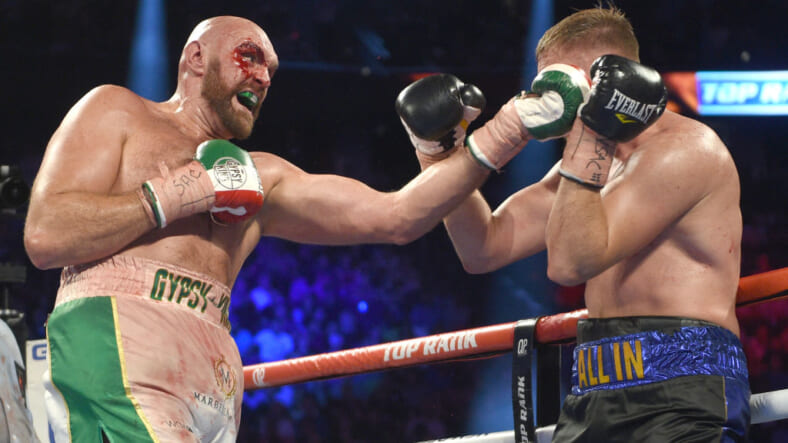 Tyson Fury was criticized by some for squaring off with his second unknown fighter in a row in the undefeated-but-unknown Otto Wallin Saturday night, but it turned out to be an unexpectedly dramatic 12-round decision victory.

Fury (29-0-1, 20 KO) who destroyed the little-known Tom Schwarz back in June, suffered a deep cut over his right eyelid via a punch from Wallin in the third round, and the worsening gash loomed ominously over the rest of the fight. It could have been stopped at any time and been declared a TKO victory for Wallin had the doctor stepped in, snapping Fury’s undefeated record and spoiling his megabucks rematch with rival heavyweight champ Deontay Wilder.

“I did everything I could. I tried my best. Tyson is a great champion,” Wallin said after the fight. “I tried to hit (the cut) even more (than I did). I know it was a punch that did it, and I was happy that he was cut, but I wish that I could have capitalized even more on it.”

Fury admitted that the big, bloody cut was a huge problem for him.

“For the majority of the fight, I couldn’t see out of my left eye,” Fury said. “It was a good performance. Otto Wallin is a tough Swede. Blood, guts, heart, all shown tonight.”

"Deontay Wilder, I want you next, bum." @Tyson_Fury calls his shot 👀 pic.twitter.com/bToOw7597x

Fury then called out Wilder, who he fought to a thrilling draw last year (and memorably got up from a Wilder knockdown looking like The Undertaker from the WWE) in one of the best heavyweight fights in years.

“Deontay Wilder, I want you next, bum!” Fury said. “He’s next, February 22nd. I’ll let the cut heal, enjoy myself, and get some time with the family.”

The fight drew a crowd of 8,249 to the Las Vegas Strip and was streamed on ESPN + right after the streaming sercice broadcast a UFC Fight Night in Vancouver in which fan favorite Donald “Cowboy” Cerrone suffered a first round knockout at the hands of Justin Gaethje.

Fury famously upset Wladimir Klitschko in 2015 to win the Ukrainian legend’s heavyweight titles, but was stripped of them after battling mental and drug abuse problems and not fighting for more than two years.

While Wilder-Fury II is signed for Feb. 22, 2020, Wilder still has to get past a rematch with Luis Ortiz, and Fury’s cuts have to properly heal before we see the “Gypsy King” return to the ring for the absolute biggest fight in boxing right now.