The death toll has topped 70, with only six survivors. 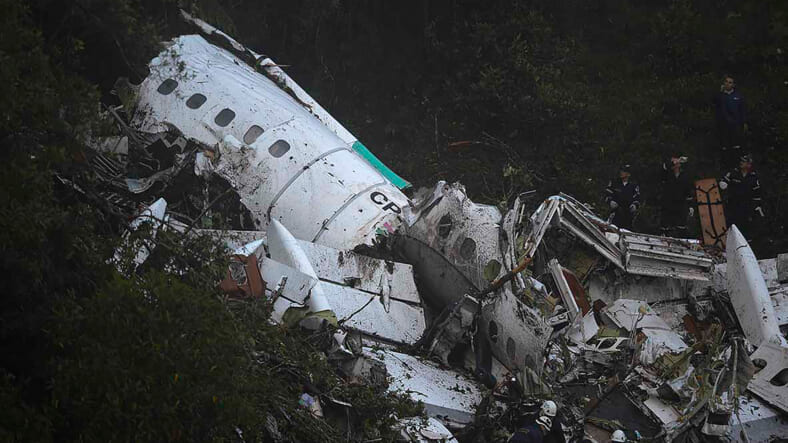 A plane carrying the Brazilian soccer team Chapecoense, along with team staff and journalists, to Colombia for the final of the Copa Sudamericana crashed late Monday, killing more than 70 people and leaving only six survivors. The crash came just minutes before the plane would have reached it destination in Medellin, where it was to play the first leg of a home-and-home with Atletico Nacional.

For the historically small-time Chapecoense, the final of the Copa Sudamericana marked the biggest moment in team history. In 2014, the team from Southern Brazil made its way to the nation’s top division for the first time in four decades. Now, on the verge of playing for the nation’s second most prestigious trophy, the team is no longer.

In a brief statement on its Facebook page, the club said, “May God accompany our athletes, officials, journalists and other guests traveling with our delegation.” Its official Twitter account also posted a video of the team celebrating its last win, along with the message, “This is the last picture of our warriors.”

Condolences and tributes to Chapecoense from all of the soccer world began pouring in Tuesday morning. Teams such as Barcelona and Real Madrid held moments of silence before training and many of the world’s biggest soccer clubs posted messages of support on social media.

Our thoughts are with everyone at @ChapecoenseReal, their families and all those affected by the tragedy in Colombia.

With more than 70 deaths, this plane crash ranks among the worst sporting tragedies of all-time. Aviation related accidents have claimed the lives of more than 70 athletes only seven times before, with the most recent coming in 1989 when 176 Surinamese soccer players were killed on a flight home from Amsterdam.