Lesnar’s Octagon appearance after D.C. won the heavyweight championship was truly something to behold. 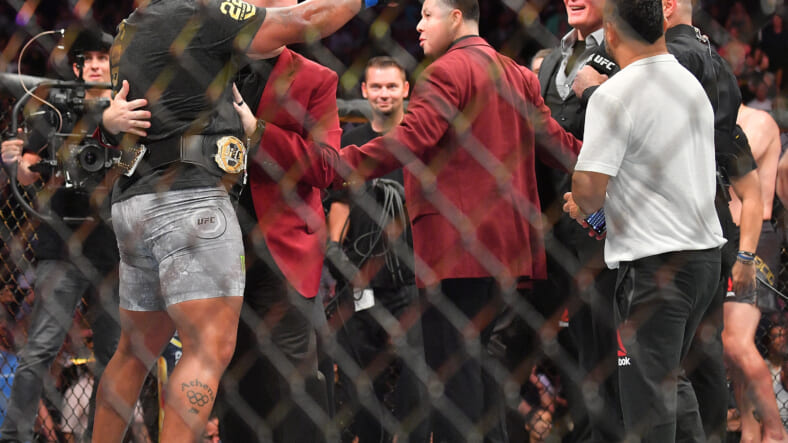 UFC 226 belonged to Daniel Cormier. The light heavyweight title holder knocked out heavyweight champ Stipe Miocic in the first round of Saturday’s main event, becoming the first man to ever hold both belts at the same time.

Cormier basked in the glory of his accomplishment with Joe Rogan for a couple minutes, before turning his attention to what’s next. Taking the mic from Rogan, Cormier said, “There’s a guy that I’ve known for a long time. He’s a wrestler, He’s an all-American. He’s a former UFC champion. I never thought I would fight him, but Brock Lesnar get your ass in here.”

And with that, this UFC match turned into a WWE-worthy promo. There was pushing and shoving, tussling for the microphone and then Cormier hit Lensar with this zinger: “Push me now. Get slept later.” Then it was Lesnar’s turn. He got on the mic and started saying bad words:

If this was supposed to look like a spontaneous eruption from Cormier and Lesnar, it failed.

I’ve seen some stupid, staged bull shit, but this Brock Lesnar-DC thing is one of the lamest things I’ve ever watched.

How embarrassing for the UFC and this whole event to force a staged encounter with a roided up, glass-jawed Brock Lesnar, completely taking away from Cormier’s achievement. GTFO. #UFC226

DC hyping up and calling Brock to the stage was staged so bad. Made it worse when Brock pushed him like a trashy WWE wrestler.

I get Ronda in the WWE is huge but Brock Lesnar and DC trying to bring WWE into the Octagon…pathetic. It was more staged than Bash at the Beach 2000. GTFO#mma #UFC226 #WWE

The UFC clearly has plans for this two, and Dana White confirmed as much later in the evening, saying, “We’re definitely going to make that fight.” Reports suggest it could happen as soon as January.

That’s just enough time for Lesnar to serve the time left on the year-long suspension he received after testing positive for a banned substance prior to his 2016 fight against Mark Hunt. Lesnar would also need to go through six months of drug testing by USADA before he’s allowed back in the cage, and that process has reportedly already begun.

Lesnar, who is still wrestling with the WWE, where he holds the Universal Champion title, has received the thumbs up from Vince McMahon to return to the Octagon, White said.

It’s worth asking whether Lesnar belongs in the Octagon though. The guy has a terrible time following the UFC’s doping rules, hasn’t won a fight since 2010 and is forever jumping back and forth to the WWE. But even with all that working against him, he gets people “hyped AF.” It’s little wonder then that the UFC is eager to have him back coming back.

Daniel Cormier vs Brock Lesnar is gonna be 🔥🔥🔥🔥 Let's Go! Already hyped AF for it. #UFC226

UFC needed this! Brock Lesner and DC going at it in the Octagon! Can’t wait for this fight!! I m calling it for UFC at MSG or the final PPV of the year! Let’s go!!!’ #ufc226