Is it the right move…or a sign of team sports going soft? 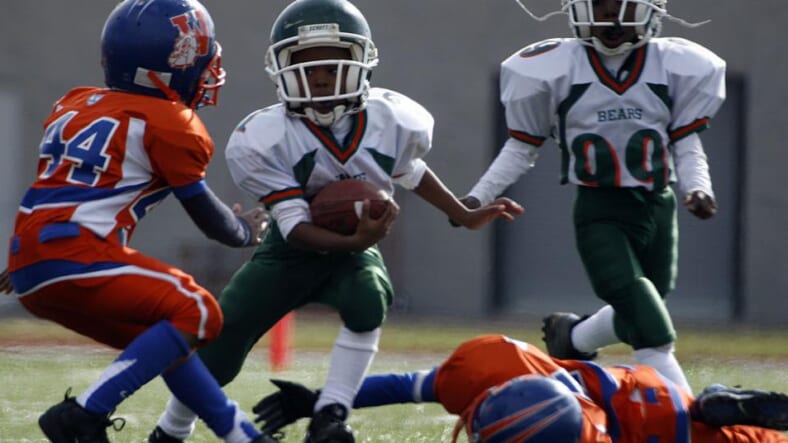 Kids in California who haven’t reached their freshman year in high school will no longer be able to play tackle football if a new bill meant to protect children from head injures is signed into the law.

The bill, which is similar to other proposed in the last month in Illinois, Maryland and New York, will be considered this spring.

“The Super Bowl may be over, but the risk of brain injury to kids who play tackle football remains,” Assemblyman Kevin McCarty said. “We have an obligation to protect children from dangerous, long-term injuries resulting from tackle football, especially brain trauma.”

The proposal comes with the popularity of youth football already on the decline. Since 2009, participation in youth tackle football is down 20 percent, according to the Sports and Fitness Industry Association. While that drop can’t be pinned on one single reason, an increasing awareness of the dangers of the game no doubt plays a major role.

It’s little wonder why. Last year, a study from Boston University said football players who began playing before the age of 12 suffered more behavioral and cognitive issues later in life than those who began playing after 12.

“The brain is going through this incredible time of growth between the years of 10 and 12, and if you subject that developing brain to repetitive head impacts, it may cause problems later in life,” Dr. Robert Stern, a BU neurologist told the New York Times last year.

Even the NFL, which has been slow to acknowledge the risks of the game, appears to realize the benefit of children avoiding head trauma. The league has recently begun promoting flag football as a safer alternative.

Some ex-players have joined the movement to ban youth tackle football too.

“I beg all parents to please don’t let your children play football until high school,” Nick Buoniconti, a Dolphins Hall of Famer, said last month. “Believe me, I love football. I love it. But I made a mistake by starting my career at nine years of age with an ill-equipped helmet.”

Buoniconti is part of a cadre of former NFL players who’ve launched an initiative called “Flag Football Under 14.”

Young people playing non-contact versions of football in adolescence is only one possible way around the head injury problem. They could also not play football at all until they get to high school, which worked for Tom Brady.