Cam Newton Apologizes for Sexist Remark to Female Reporter, As Mia Khalifa Torches Him on Twitter

“My word choice was extremely degrading and disrespectful to women.” 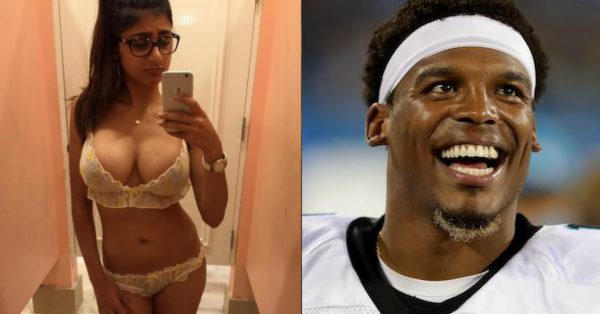 Thursday was the worse day of Cam Newton‘s professional career–and the Charlotte Panthers quarterback didn’t even step on the football field.

He didn’t have to. The 28-year-old screwed up big time in a press conference, making headlines for a dumb, sexist remark to a female reporter on Wednesday. Then he spent Thursday getting absolutely killed for it.

It wasn’t just the social justice warriors nailing Newton for being surprised that a female reporter knew something as rudimentary as wide receiver routes. He also got hammered by his sponsors.

Gatorade called Newton’s remarks “objectionable and disrespectful to all women.” Oikos, the yogurt brand owned by Dannon, got even angrier.

“It is entirely inconsistent with our commitment to fostering equality and inclusion in every workplace,” the company said in a statement. It also said it would no longer run ads featuring the quarterback.

With all that heat raining down on him, Newton apologized in a video posted to Twitter. “After careful thought I understand that my word choice was extremely degrading and disrespectful to women,” he begins.