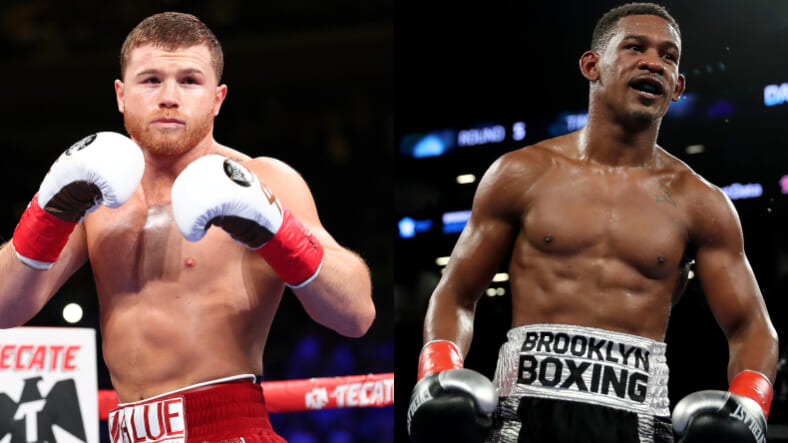 It’s a Thursday night on the Las Vegas strip. The party is at Topgolf, a sprawling entertainment venue with bars, games, TVs the size of billboards and possibly the largest, high-tech driving range on the planet. It’s a man-cave on steroids.

There are athletes and celebs and executives and writers and Tecate girls in red jumpsuits. Beer and tequila are flowing, the music is pumping, and it’s like an electrical charge is running through the place.

It’s fight week in Sin City and this is definitely a Big Fight.

“In the past few decades, there’s always been really high demand for big fights around Cinco de Mayo,” Bernard “The Executioner” Hopkins tells me.

He knows. Hopkins is a former world champion and one of the greatest middleweights in history. But you don’t have to be a former champ to know it’s a special time.

“I always tell people who’ve never watched boxing that there’s nothing like a big fight,” says Billie Jo Powers, a Tecate ring card girl whose smile could light up half of Flamingo Boulevard. “Especially when it’s in Las Vegas. There’s so much leading up to it. The press conference, the weigh-in, the parties. People flying in from all over the world.”

The 28 year-old pride of Guadalajara, Mexico is the full package. He’s got power in both hands and can as easily batter the body as he rattles opponents’ heads. Canelo Alvarez moves extremely well for a 160 pounder, equally comfortable on the outside and inside.

Canelo’s not afraid to take on all comers, or opponents in their prime. He’s faced Miguel Cotto, Floyd Mayweather, and had a pair of sensational nail-biters against Gennady “GGG” Golovkin.

Canelo’s star power has paid off. In 2018 he signed the biggest contract in sports history (at the time) – a $365 million dollar, 11-fight deal with DAZN, a sports streaming service.

He’s facing a serious contender in this Big Fight. Daniel Jacobs a.k.a Golden Child a.k.a. The Miracle Man is not one to sit on the wrong end of a one-sided beatdown.

He’s a two-time middleweight world champion whose style combines strength, hand speed and power. Since turning pro in 2007, Jacobs has won 29 of his 35 fights by KO (an astounding 81% rate). The 32 year-old has done all this and he also beat a bout of rare bone cancer in eight years ago.

“I’m ready to show the world I’m the best middleweight of my generation,” says Jacobs of the mega-showdown. “Fans are gonna see fireworks, masterful boxing, persistence and grit. It’s gonna be popping this weekend.”

Back at Topgolf the party shows no sign of slowing down. After all, this is Vegas. And the buzz about Saturday’s match continues to build.

“These are two worthy, respected guys that really match up well,” says Bernard Hopkins. He likens the bout to a legendary Super Bowl rivalry: “This is like Dallas and Pittsburgh in the 80’s.”

Who will be the last man standing when Alvarez and Jacobs face off in front of 20,000-plus fans at the T-Mobile Arena? Oddsmakers have Canelo as a 4-1 favorite. The fighter plans to live up to those numbers.

“If the knockout is there, I’m going to take it,” says Canelo. “I’m ready to continue writing history.”

Jacobs has a weapon that could potentially neutralize Canelo: Size. He’s got a three and a half height advantage and a longer reach.

Sometimes picking a winner just comes down to a gut feeling.

“Danny Jacobs has such a beautiful story with all the struggles he overcame,” says Tecate’s Powers. “And this is going to be a really good fight for fans. But I have to go with Canelo. I hate to pick favorites but he’s our guy.”

Canelo Alvarez versus Daniel Jacobs kicks off this Saturday night, May 4.