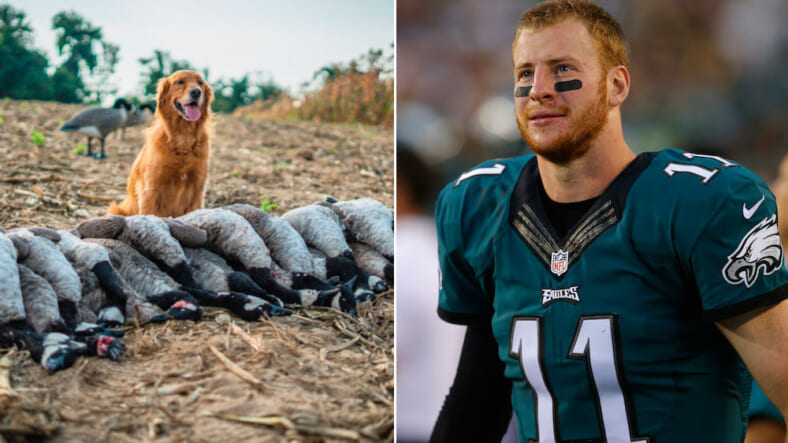 Carson Wentz was just trying to wish his dog a happy birthday.

In a simple tweet sent by one of the NFL’s most overtly-wholesome players, Wentz, Philadelphia Eagles quarterback, publicly celebrated the birthday of his bizarrely-named dog Mama Henley.

Happy 5th Birthday to Mama Henley! We’ve been through a lot in 5 years. Best dog and hunting buddy I could ask for! pic.twitter.com/HW8DbxTyML

If you can’t imagine how something like this could create a controversy, then you haven’t spent much time on Twitter.

While most of the responses to Wentz’s tweet were positive, some people took issue with all those dead birds.

What are you going to do with all those dead geese? I hope eat them and put them to good use and not for sport. I love animals and appreciate you celebrating your dogs birthday, but agree some could find it offensive.

Wentz later tweeted a defense of the picture. “Two of the main things I tweet about are Jesus and hunting,” he wrote. “That’s what I’m passionate about and that won’t ever change! When you love something, you talk about it! Stay convicted about it and don’t worry what others think!”

Wentz is indeed an avid hunter. When the Eagles were on a bye earlier this season, he busted out the camo and hung out in a tree stand.

Still readin’ the field on this Sunday… just from a different view 🙌🏼 #WentzBrosOutdoors pic.twitter.com/bpH6qNoVMi

Wentz must be used to setting of this kind of firestorm by now. Earlier this year, he took a rash of shit from fans after responding to the mass shooting in Las Vegas with a tweet about the need for Jesus.

So much hate and evil. So sad. The World needs Jesus in a bad way.

Praying for all those affected in Vegas.

Combining the issues of religion and gun violence into one tweet, perhaps predictably, made some people mad.

Perhaps Jesus wants the US to do something about the easy availability of guns and the fragile mental health of some white men?

For his own good, Carson should just log off.