You’ve got to see this to believe it. 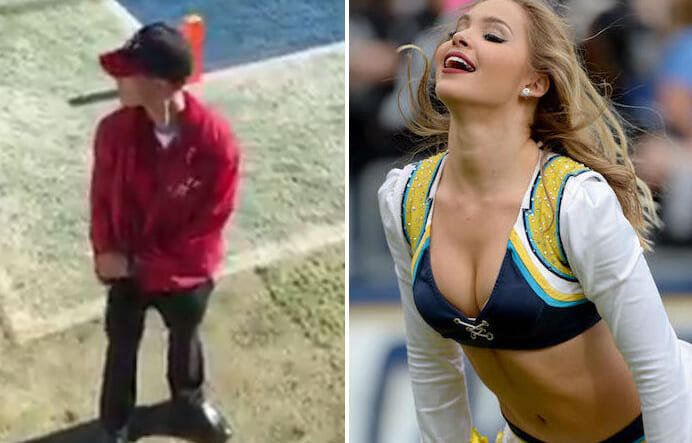 A San Diego Chargers security guard was caught on film pulling his pud during the team’s game against the Raiders last Sunday. The creep was standing just a few feet from the team’s cheerleaders as he yanked away, seemingly unaware of the thousands of people looking on.

Watch the video, if you must.

The video was initially posed on Facebook and eventually removed, but not before it caught the attention of the team and Elite Security, the company the man was working for.

“The Chargers, Elite Security as well as the San Diego Police Department are aware of the disturbing actions of an Elite Security staff member at Sunday’s game,” the Chargers said in a statement.

“We apologize to any fans who may have witnessed the incident. Elite Security is currently investigating the incident and has vowed to take immediate and appropriate action.”

This perv might have bigger problems than losing his job though. What he’s doing in this video, assuming this isn’t one big misunderstanding, is clearly against the law. Lucky for him, the San Diego police say they’re not aware of the incident. Not yet, at least.