Ric Flair’s daughter is asking for the racy pics to be removed immediately. 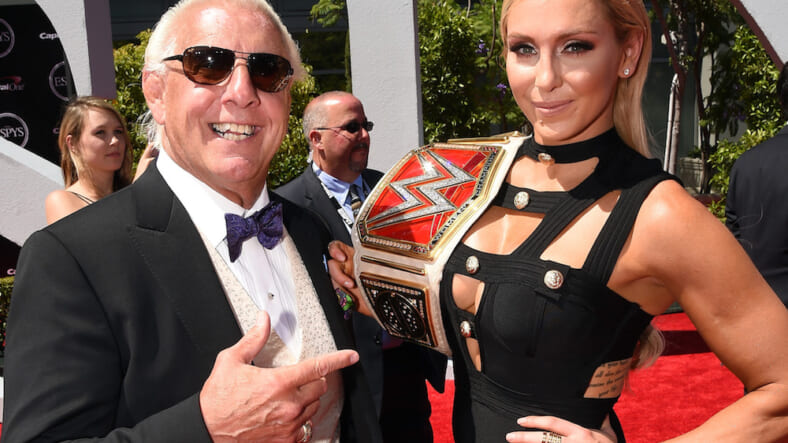 The daughter of wrestling legend Ric Flair is the latest WWE star to fall victim to hackers who appear dead set to violate the private lives of every woman in wrestling.

“Private photos of mine were stolen and shared publicly without my consent,” she wrote Thursday in a now-deleted tweet. “These images must be removed from the Internet immediately.”

Anyone who looks hard enough will find that he request has not been satisfied. They’ll also found a handful of selfies taken in a mirror, some nude, others of Charlotte in her underwear. In the pictures, her phone is protected by a case emblazoned with the WWE logo.

The 31-year-old Charlotte joins a handful of female WWE stars to endure the indignity of a hacking incident in recent months. The most high-profile, to this point, has been Paige, who had photos and videos stolen. It was a traumatic ordeal for the 24-year-old.

Other WWE stars have denied that alleged leaks were actually them. Late last month, two-time Smackdown women’s champion Alexis Bliss tweeted, “Once again, the risqué photos on the Internet supposedly of me are bogus.”

Once again, the risqué photos on the Internet supposedly of me are bogus.

I am offended and demand these altered photos be removed immediately

Unlike Paige, who saw a backlash after a hacked photo offended wrestling fans becuase of how she was using a championship belt, Charlotte has seen nothing but support in the aftermath of her hack. On Thursday, wrestling fans used the hash tag #IStandWithCharlotte to show that they, well, stand with Charlotte.

#Istandwithcharlotte Sorry this happened to you. You don't deserve this. Still, this doesn't change anything. You're the Queen!

As Charlotte tries to get her private photos taken off the internet, here are some public ones to enjoy.