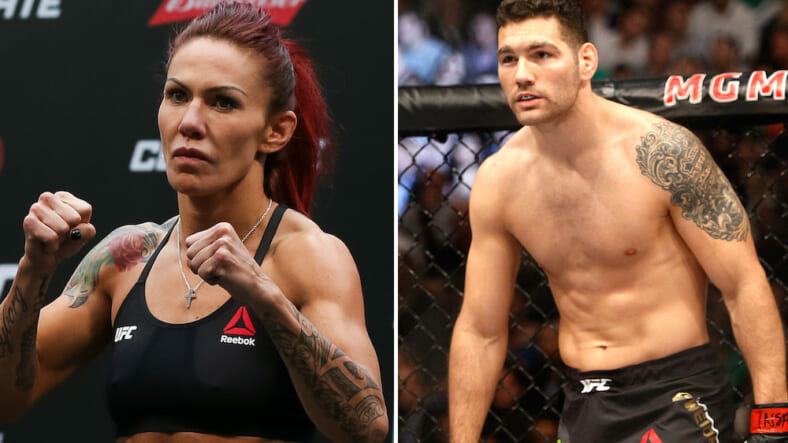 Back in May, famed Brazilian ass kicker Cris Cyborg leveled a fellow UFC fighter outside of the ring in what has become one of the weirdest sports stories of the year. It started with some mean tweets sent by Angela Magana, a UFC strawweight who’s better at trash talking than fighting.

And it ended with Cyborg punching her during the UFC athlete retreat in Vegas. The punch and its aftermath were caught on video here:

What wasn’t caught on tape was what preceded the punch. But former UFC middleweight champ Chris Weidman was there and recently spoke with The MMA Hour about what went down.

Basically, Cyborg was going nuts on her, like all the words you can think of. She was screaming ‘Who the fuck do you think you are?’ and talking like this and blah, blah, blah.

“Magana was kind of quiet and shocked. She was kind of smiling, like a nervous smile. I was thinking, ‘Oh my God’ because she’s way smaller than Cyborg.”

Weidman said that Magana started cursing back at Cyborg, so he decided to step in to help calm their nerves. It didn’t work.

Weidman went on to admit that he didn’t want anything to do with Cyborg.

What am I going to do, step in there to Cyborg and say, ‘No, I will touch you’ and she kicks my ass? What am I gonna do, kick her ass? Either way, I’m screwed.“What if she knocked me out? I may as well just retire then.”

Can you really blame the guy?