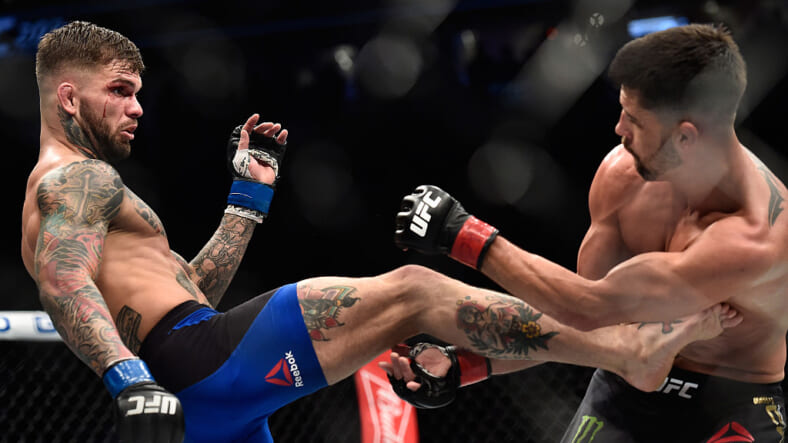 Cart touch this!! Shoutout to the movement💯👌🏼 @Cody_Nolove schooled him in every round class pic.twitter.com/Rd9ZbP4sLE

Some newer faces in the UFC appear to be taking lessons from mouthy, supernaturally cocky dual weight class champion Conor McGregor. Well, one new face, to be specific — the winner of the men’s bantamweight belt in UFC 207, Cody Garbrandt. In fact, Garbrandt so thoroughly schooled opponent Dominick Cruz that he even took a hilarious little dance break in round 4.

While the match wasn’t nearly as heralded as the ultimately anticlimactic Rousey-Nunes blowout, Cruz entered the Octagon with an apparent edge. Garbandt soon showed that he was in charge. As the dancing clip alone demonstrates, he seemed to almost psychically anticipate some of Cruz’s offense, bobbing and weaving with speed and skill before solidly connecting and dropping Cruz to the mat.

His victory was a dream come true for Garbrandt. He said he’d been waiting to hear his name announced as champion since he was a kid.

Garbrandt wasn’t bothering with a gracious win, either, giving his defeated opponent a hell of a backhanded compliment. “[Dominick Cruz] has a big head,” he said, “and it was hard to knock him out. He is one of the best in the world. Now I’m the best.”

Caught on TMZ’s cameras after the match, Garbrandt called the bout “the best 25 minutes of my life.”

He may need to tighten up his pop & lock, but it looks like Cody Garbrandt knows how to deliver a solid beatdown when the dancing is done.