How To Bet on the Biggest College Football Games This Weekend

Everything you need to know ahead of Michigan vs. Notre Dame and Miami vs. LSU. 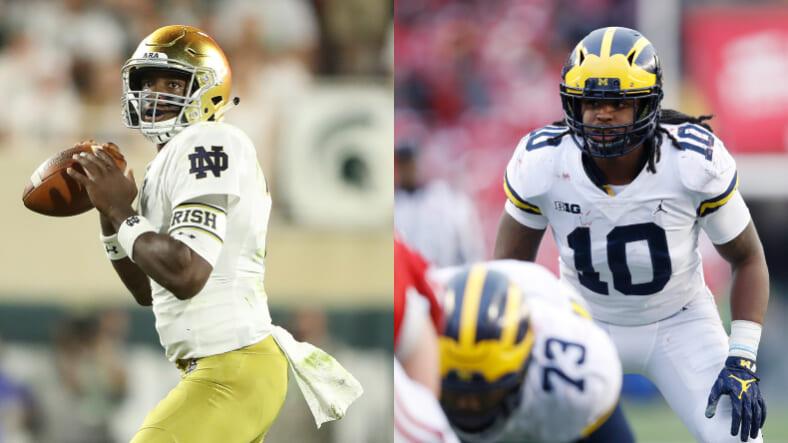 The Supreme Court’s May 14 strike down of PASPA has allowed sports betting to take the United States by storm this summer. It is now set to explode with the college football season finally upon us.

With that in mind, here’s a little guidance for the first big weekend of NCAA football, with previews against the spread of two of the marquee matchups on the board. Michigan at Notre Dame on Saturday and Miami playing the LSU Tigers at AT&T Stadium on Sunday.

Having said all that, remember that sports betting is meant to augment the viewing experience, not to stress you out or sack your bank account. Have fun and only gamble what you can afford to lose, and you’ll find your Saturdays and Sundays this fall that much more enjoyable.

Michigan is coming off a disappointing 8-5 season including losses against both Michigan St. and Ohio St. at Michigan Stadium. Whereas, Notre Dame had a stellar 10-3, 2017 season. Although they did falter down the stretch before beating LSU in the Citrus Bowl.

The Wolverines are absolutely stacked on the defensive side of the ball, bringing back 9 starters. Linebacker Devin Bush is one of the hardest hitters in the nation. He led the Wolverines in tackles last year with 102, and was second on the team in pass breakups with seven.

Rashan Gary may be even better than Bush this season. He is one of the top defensive linemen in college football and projected to be a top ten pick in the 2019 NFL Draft.

The Michigan defense should cause havoc all season, but with Gary and his new contact lenses, and Bush in pursuit, it should be hunting season all afternoon for the Wolverines in South Bend.

Offensively for Michigan, the hype for quarterback, Shea Patterson, an Ole Miss transfer, is real. In seven starts, his sophomore year for the Rebel Black Bears, Patterson had an impressive 63.8 completion percentage on 8.7 yards per completion.

Patterson lost his favorite target in practice when Tarik Black fractured his foot, but the Wolverines had enough depth at wideout that they should be able to withstand this loss.

If they do have to lean on their running game, this is not necessarily a bad thing, as the formidable duo of Karan Higdon and Chris Evans combined for more than 1,500 yards last season.

The Irish should have one of the top defensive teams in college football this season as well, returning ten starters. Unfortunately, Notre Dame does not have defensive momentum on their side coming off last season.

According to an article published by the Associated Press:

On offense, quarterback Brandon Wimbush spent the offseason working with quarterback guru Taylor Kelly looking to improve his lackluster 49.5 percent completion percentage, as his accuracy had gotten worse as the season progressed. In the final four games, Wimbush completed just 33 of 75 passes and had two multi-interception performances.

Even if Wimbush does improve vastly with his accuracy, the Irish bring back a mere total of 80 receptions from last season. Two of the receivers that return are senior Miles Boykin, who was the Citrus Bowl MVP and junior Chase Claypool. Both come in at an imposing 6-foot-4 and 230 pounds.

Still, it should take some time for the senior quarterback to gel with his young wide receiver unit.

Finally, Notre Dame is just 5-8 against top twenty teams in the last three years under Brian Kelly. They also lost two top ten draft picks on the offensive line to the NFL draft.

The Hurricanes are coming off of a season where they started 10-0 and received national recognition for the turnover chain. LSU is coming off a solid season as well finishing ranked number 18 in the final AP poll after losing to the Fighting Irish on January 1st.

What many people fail to realize is that Miami had a rash of injuries throughout the season, negating his weapons.

According to an article by Bill Connelly that appeared in SBNation, when Rosier had his full arsenal of weapons, he was nearly unstoppable.

Defensively, fans will want to keep their eyes glued to Miami’s number 4, Jaquan Johnson. The whirling dervish strong safety was always around the ball last season. He led the team in forced fumbles with three and tied for the leader in interceptions with four while having a team best 96 tackles.

The big question for the LSU Tigers is on the offensive side of the ball as new coordinator Steve Ensminger installs a new spread heavy offense.

This will excite many fans who had grown weary of the former coach, Les Miles, pound the ball running game play action offense. Regrettably, also for fans, it should take some time to implement as demonstrated by the trouble the O had in the spring scrimmage.

The defensive side of the ball should be the Tigers’ strength early.

LSU ranked number 14 nationally in scoring defense last year with a very young core. That defense is a year older adding a recruiting class that is very strong on the D-Line.

While the defensive side of the ball gives Tigers fans some hope early, LSU, has a dispiriting amount of injuries and suspensions going into game one in Miami.

With these questions on offense and ineligible players for the Tigers, as long as the punt game and Zach Feagles for Miami isn’t consistently giving LSU great field position, Miami has a notable advantage which should allow the Canes to cover the -3.5 point spread.