If Conor is unwilling to defend his UFC belts, this could be his next fight. 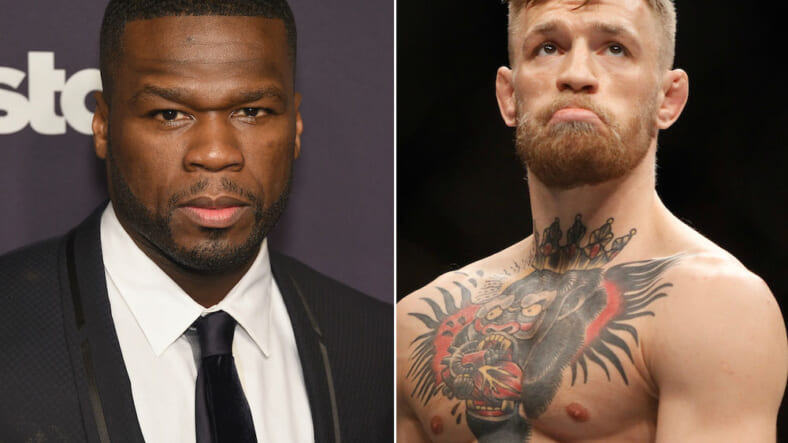 In July, while Conor McGregor and Floyd Mayweather were traipsing across the country to gin up excitement for their so-called Money Fight, the rapper 50 Cent was briefly pulled into the madness.

For reasons that remain a mystery, McGregor yelled “50 Cent’s a bitch,” to a crowd in Brooklyn .

Several weeks after McGregor’s beatdown at Mayweather’s hands, 50 was feeling cocky and started talking trash about McGregor. Asked if he could take the UFC champ, 50 said, “In the street? Yeah! C’mon, he weighs 150 pounds, man!”

Now he’s doubling down on the claim. This week a reporter asked 50 about fighting McGregor and he went off.

“They don’t understand this is heavyweight shit going on around here. I hit them, they see a white light.  They hear a message. Slow down, boy. They think Jesus is talking to them. Outside the confinements of the sport. If you got into a [street] fight, it’s a different thing.”

At the moment, McGregor throwing down in an alley with 50 Cent seems more likely than his defending a title in the Octagon. The Irishman has not fought for the UFC in nearly 14 months and his fellow fighters are starting to call him out on it

This week, bantamweight champion T.J. Dillashaw insisted that he’s going to be active defending his title. “I’m not a Conor McGregor,” he said. “I’m going to be active defending my belts. I’m not afraid to fight.” Khabib Nurmagedov, who is McGregor’s most likely opponent for 2018, has also called for the lightweight champ to be stripped of his belt if he refuses to fight.

And there’s little sign McGregor will back in the cage soon, especially if he doesn’t budge from his financial demands. Plus, he doesn’t really have time to take on a real UFC opponent. Not when he’s so busy playing pretend with billionaires.