Conor McGregor Announces Retirement (Again) And No One Believes Him

“The game just does not excite me, and that’s that. All this waiting around. There’s nothing happening.” 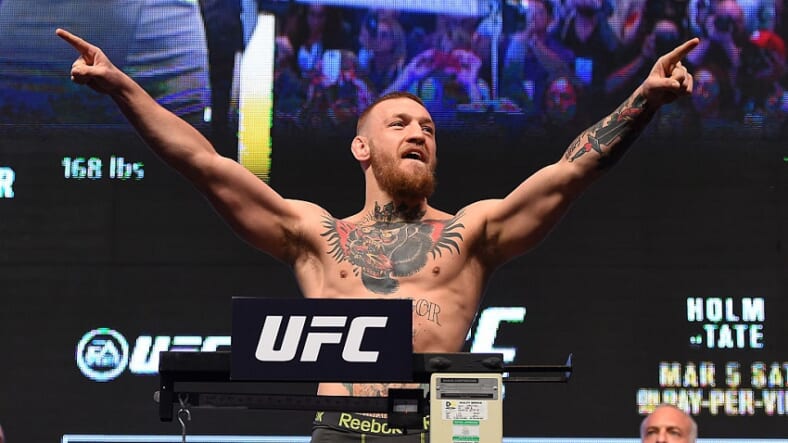 UFC 250 was supposed to be Amanda Nunes‘s night. She beat challenger Felicia Spencer handily in their match Saturday at the Las Vegas UFC facility and made history, becoming the first fighter to ever defend a pair of championships while holding titles in two weight classes. Then Conor McGregor decided it was time to stir things up by retiring—for a third time.

Hey guys I’ve decided to retire from fighting.
Thank you all for the amazing memories! What a ride it’s been!
Here is a picture of myself and my mother in Las Vegas post one of my World title wins!
Pick the home of your dreams Mags I love you!
Whatever you desire it’s yours ❤️ pic.twitter.com/Dh4ijsZacZ

“Hey guys I’ve decided to retire from fighting,” McGregor tweeted just before 1 a.m. “Thank you all for the amazing memories! What a ride it’s been!” He also posted a photo of him hugging his mother after he’d won a title belt and followed up with “Pick the home of your dreams Mags(,) I love you! Whatever you desire it’s yours.”

Mags is his mother Margaret’s nickname.

So even as he announced once again that he was done with MMA, McGregor maintained diva status by stealing Nunes’s spotlight.

McGregor’s announcement was greeted with pure skepticism from many fans.

When you see Conor Mcgregor saying he's retiring for the 4th time https://t.co/px3KQPeMvV

Fucking sick of this after every event. We had a night of great fights;bantamweight is moving again with a clear challenger and a prospect. It shouldn't always come back to Conor and Khabib after every event. pic.twitter.com/X9NaYavoOj

If Conor McGregor has definitely retired, I'll show my arse at the town hall. He's pulling his usual attention seeking post's after the fights. #UFC

…It’s now the third time in four years the former two-division champion has announced his retirement. He also said he was done with fighting in 2016 and 2019, only to return.

McGregor recently hasn’t sounded like a fighter ready to call it quits. On May 28, he posted on Twitter that he would accept a fight with Anderson Silva, another UFC legend. According to ESPN, this summer McGregor was once tied to a potential fight with current top lightweight contender Justin Gaethje, and there also had been speculation of a trilogy bout, tiebreaker bout against Nate Diaz.

It’s possible this is simply a McGregor tactic to get something he wants from the UFC. If he’s trying to twist Dana White‘s arm, though, he may be out of luck.

Following UFC 250, White said that no one “is pressuring anybody to fight,”

“And if Conor McGregor feels he wants to retire,” White continued, “you know my feelings about retirement—you should absolutely do it.”

“And I love Conor,” White continued, saying that of the few “people that have made this really fun for me,” McGregor is “one of them.”

Thank you very much to my coaches, my gym, my family, my friends and the fans. Thanks to the Creator of the Sky and Earth for this opportunity 🙏🏼 #bestofalltimes #amelhordetodosostempos pic.twitter.com/stX4Wb2B5R

As for the actual champion of the night, Amanda Nunes now owns the women’s featherweight and bantamweight divisions. There have been two-division champs before, but Nunes is the only one to defend both.

She was clear on her accomplishment after the match, saying “no one else ever did that before.”

Nunes went on to say, “It’s amazing. I knew something big was going to happen in my life. Sometimes you’re surprised by how big it is.”

In an interview with ESPN’s Ariel Helwani on Sunday afternoon, McGregor said he’s bored with the fight game due to the lack of big-name opponents available to him right now.

“I laid out a plan and a method that was the right move, the right methods to go with. And they always want to balk at that and not make it happen or just drag it on. Whatever I say, they want to go against it to show some kind of power. They should have just done the fight — me and Justin for the interim title — and just kept the ball rolling.”

If McGregor is really done with fighting (and practically no one believes that he truly is), he’s walking out after a legendary career as the UFC’s biggest star. He flattened Eddie Alvarez to win the UFC 205 lightweight belt at UFC 205 in 2016, and that’s when he became the UFC’s first double weight class title holder.

Whatever he’s up to, even if he is finally truly done with the Octagon, there’s little doubt we’ll be seeing Conor McGregor again.