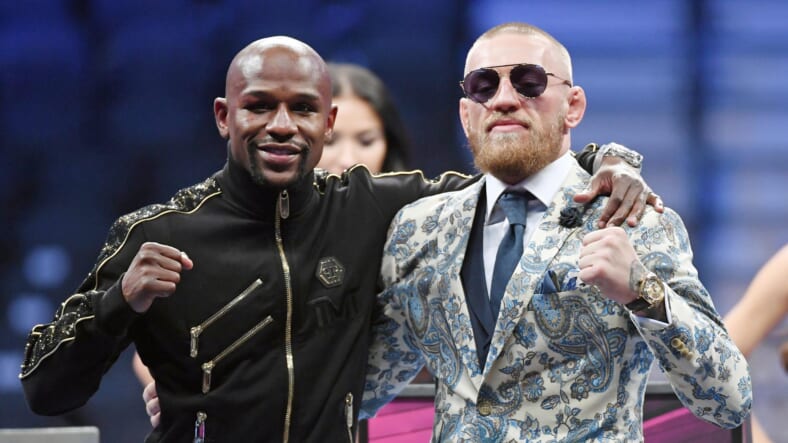 Conor McGregor doesn’t want any help from Floyd Mayweather in preparing for his much-hyped superfight against Khabib Nurmagomedov at UFC 229.

“The Notorious One” made that abundantly clear when he responded to his former opponent’s offer to train at the Mayweather Boxing Club in Las Vegas.

“I’ll talk with Dana, I may talk with Conor to get some tickets,” Mayweather said in a video from TMZ Sports. “But leading up to the fight, when McGregor gets to Las Vegas, we’d like him to train at — I know the UFC has got a training facility — but we’d like for him to work out at the Mayweather Boxing Club.”

To put it lightly, the outspoken Irishman turned down the 50-0 boxing legend.

“Fuck the Mayweathers, except Senior and Roger,” McGregor tweeted. He added that “there is no peace here, kid” and told Mayweather to “step up or step down.”

Fuck the Mayweathers, except Senior and Roger.
There is no peace here kid.
Step up or step down.

If that profane three-word dig sounds familiar, it’s because McGregor tweeted the same thing back in January.

In the aforementioned video from TMZ, Mayweather went on to praise McGregor’s warrior mentality.

“Conor McGregor, he’s a tough competitor,” Mayweather said. “Like I said before, Conor McGregor’s not gonna back down from anyone. He’s not scared, he’s a warrior.”

Mayweather, who easily defeated McGregor in a mega-hyped boxing match that earned both fighters more than $100 million last August. So it’s no wonder he speaks fondly of Mystic Mac.

But given Mayweather’s rich history of trolling McGregor and UFC fans, we have a feeling he might change his tune about the MMA superstar in the near future.