Conor McGregor Can’t Throw a Football, And The Internet Is Absolutely Roasting Him

He definitely needs to stick with MMA. 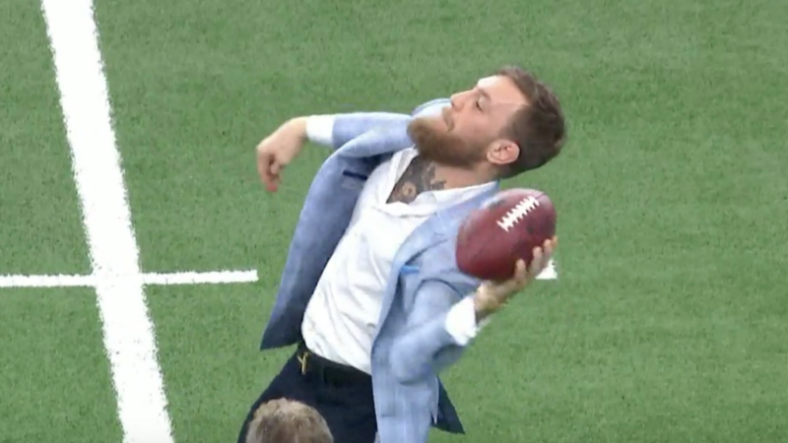 Despite his decisive UFC 229 loss to Khabib Nurmagomedov, no one doubts that Conor McGregor is a superior athlete. He’s got power, speed and dazzling technique, and outside of other top MMA fighters, few men his size would dare to go up against him.

But athletic ability in one sport doesn’t always translate to another sport (see: Michael Jordan). And to be fair, the only football an Irishman might know is soccer, which doesn’t involve hands at all. All of this is preamble to saying yes, Conor McGregor looks like a toddler when he throws the pigskin, but he kind of has an excuse.

McGregor was hanging out with Cowboys owner Jerry Jones for some reason when he decided it was time to goof around on the field. That’s when the unfortunate throw occurred, and NFL watchers with social media accounts proceeded do some pretty funny roasting of a man no one with a brain would ever roast to his face.

What the Fook is this??? pic.twitter.com/RAo8k76UZ3

“How the Fook do you throw this ‘ting?” Yikes Conor McGregor 😬https://t.co/B4b5BRpuHQ

Lmao Conor McGregor throw a football like a loaf of bread https://t.co/xgdw919HUW

Conor McGregor doesn’t actually get enough credit for the fact he is perfectly capable of being self-effacing when he wants to be—and it looks like he totally knew he looked ridiculous and didn’t care.

After all, he was there in part to promote his new Proper 12 Irish whiskey, and he’s one of the kings of “any publicity is good publicity.” He’d probably make a round through every American sport, looking like a goofball the whole time, if it sold more bottles of hooch.