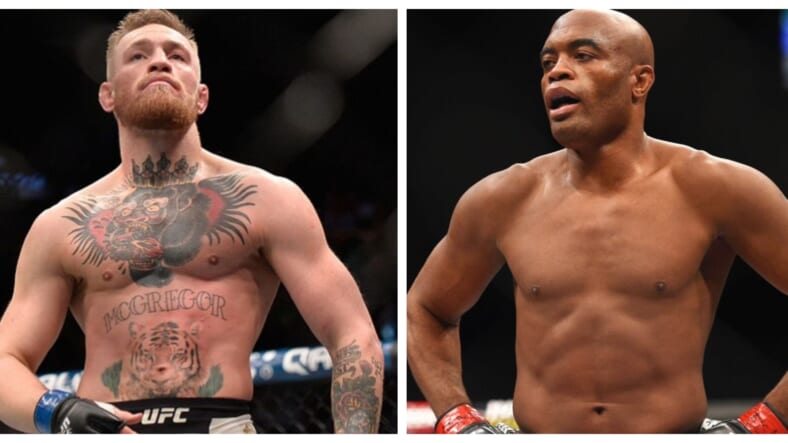 MMA legend Anderson Silva faced a much younger, undefeated opponent in Israel Adesanya at UFC 234 in Australia this weekend, and it wasn’t a Rocky moment for the aging superstar. Judges awarded the fight to Adesanya in a unanimous decision.

Another UFC superstar was watching, though, and threw his hat in the ring for a future matchup with Silva, who at 43 showed he could still ably go the distance: Conor McGregor. Oddly—for the endlessly feisty McGregor—the statement was issued with courtesy and respect.

Anderson is one crafty, crafty Martial Artist.
You only develop these methods through years of hard fought experience.
Phenomenal performance.
The crafty veteran. Big respect always.
It would be an honor!

“Anderson is one crafty, crafty Martial Artist,” McGregor tweeted, “You only develop these methods through years of hard fought experience.”

“Phenomenal performance. The crafty veteran. Big respect always. It would be an honor!”

Anything you can do, I can do. #UFC234 pic.twitter.com/GLBAPF4uG5

Silva was undaunted after his loss, and indicated he’d be willing to fight again at UFC 237 in Brazil. While UFC president Dana White said that was “definitely possible,” he had a decidedly less than positive reaction to McGregor’s tweet.

He said, “Did he really?” then unequivocally followed up with, “No, I don’t like that fight at all.”

McGregor’s interest in the match didn’t end with fighting Silva. After the latter said he’d be willing to fight Nick Diaz at UFC 237, the Notorious One again chimed in via Twitter.

Dana White’s initial reaction about a Silva-McGregor match might have been negative, but it seems hard to deny that it would be a big moneymaker. McGregor’s boxing match with Floyd Mayweather seemed like a joke until it actually happened, and this isn’t nearly as big a stretch of the imagination as that was.

No one’s making plans with the dust from UFC 234 only just subsiding, but don’t be shocked if the idea of a McGregor-Silva face-off comes up again sometime soon.